Tom  is a court expert on terrorism, intelligence analysts, and he served in Bosnia and Croatia.

He has authored some superb books, which include the following:

1. SUBMISSION: The Danger of Political Islam to Canada (With a Warning to America)

2. The New Order of Fear (Book One of the Great Reset Trilogy) 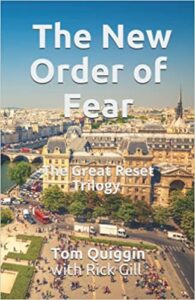 Today he came by to discuss the subject of his newest work, which is The Great Reset.

Tom gets into all the aspects of this overtly totalitarian system run by elites.

What is the Great Reset?

It is a push towards a more totalitarian system based on reworked Marxian theories. It is a rebranding of the globalization we were talking about before the pandemic situation in the context of issues suh as the UN Agenda 2030 etc. It is more of a movement than an organization. The idea of the Great Reset are at work when you hear terms such as Build Back Better, the Green Revolution, Sustainable Development, Stakeholder Capitalism and Equity.

It is not unreasonable to think of it as the former idea of the New World Order – but on steroids.

This isn’t nearly as binary to be consigned to either Conservative or Liberal.

No matter what political stripe, this sickness infects both sides of the aisle.

Is this a conspiracy theory?

Canadian Liberal Member of Parliament Mark Gerretsen says that the whole idea is a conspiracy theory and it took place in the form of suggesting that the intent behind the discussion regarding global economics was motivated by a desire for a supposed “new world order”. https://twitter.com/MarkGerretsen/status/1354085397672976385

BOOK BY KLAUS SCHWAB – COVID 19 and the Great Reset, Head of the World Economic Forum

BANK OF CANADA – The Great Reset -In August of 2020 the deputy governor of the Bank of Canada put out a presentation called the Great Reset Supporting The Transition To A Greener Smarter Economy. The paper goes on to say “COVID-19 is a shock and an opportunity,” and “Pivot to a greener, smarter economy.

PMO Website of TRUDEAU “Today, Prime Minister Justin Trudeau spoke with His Royal Highness The Prince of Wales and the Commonwealth group of Permanent Representatives to the United Nations regarding financing for development and the Great Reset initiative. The Prime Minister thanked His Royal Highness for initiating the discussion at such a critical time and for championing the Great Reset initiative to build a better and more sustainable future for all

How does one know they are in trouble?

When any government let’s it’s people know that there is trouble, but to not fear. The government will be there to help.

The conversation moves toward climate change, and how it is western nations who are being punished…but not China. Why are the green new deal nazi’s giving China the pass?

Mike and Tom gets into this with excellent depth.

Should Christians be worried about the Great Reset?

Christian theology and what you might call Judeo Christian thought are under attack for several reasons:

a. Family as the basis of societal organization (needs to be crushed so state can become the basic building block). Children are the responsibility of the parents (indoctrination not education, pod schools and home schools). Consider that here in Ontario a 12 year old can I go into a vaccination site and get a coronavirus vaccine without the parents permission. The government is arguing that a 12 year old can understand the pros and cons of taking an experimental vaccine. Is the parents asked whether the child got the vaccine or not they are told that they will be given no information due to privacy concerns. In the state of Washington in the United states a 12 year old can begin the surgical hormonal and psychological transmission from boy to girl or girl to boy without the parents being told about it. This is about the state taking control of your children.

b. Hierarchy and Equality – but get different outcomes, must be responsible. (Not Equity)

c. Protestant Work Ethic – the stress on personal responsibility, self reliance and self control is under attack. Directly targeted by the Smithsonian Institute in the USA.

d. Separation of Church and State – unacceptable as the state itself must be the organization and determining factor. For the Great Reset folks, there is only one way of thinking and that is their way and the state will determine everything in your life, based on their ideology.

Why did Tom write his new book?

Warning about the Great Reset and what could go wrong.
Action/Thriller – educate about the Great Reset and its pitfalls, but in an entertaining way
Fictional – but based on real world situations and characters\
Warning about the alliances between Islamists/Globalists and those so-called elites who are aiming for a totalitarian system with central control
Prime Minister Trudeau killed off in first book – supporter of Great Reset but seen as a liability.
Fictional – avoid lawsuits as freedom of speech in Canada is under attack (C10 and C36)
We can all feel blessed that a man of Tom’s caliber puts pen to paper like this, because it is for our benefit as a society.

Tom returns for hour 2, and explains how Justin Trudeau met a fictional demise in his book. Trudeau is strangled with a pair of halal socks from transport minister Omar Alghebra. Yes, really.

He’s really seen as a mascot for the Great Reset, rather than an actual ally.

Justin Trudeau is killed off as sort of a moral lesson. Trudeau is of course completely pro globalist, pro great reset and pro-Islamists. He is of course openly an avowedly anti Christian. He mocks Christianity. He has thrown in his political and personal future with the globalists and the Islamists. He thinks it gives him credibility and profile. But in reality, the players on the international scene who have real weight and power regard Justin Trudeau as a lightweight. He is pro great reset, but they see him more as a mascot then a player.

A deal can’t be made with the devil without one meeting a certain demise.

We must understand how fear is used to manipulate us, and perpetuate the Great Reset.

Tom’s book is a stark warning, which must be heeded!

Those who ask for a Great Reset really have no idea what they are asking for. What took place in the Soviet Union, Cambodia, and China are examples of what happens when this madness completely unfolds.

Steven Guilbeault couldn’t be further out of whack in thinking that those who rant on twitter are a threat to democracy.

If one’s feelings are hurt by a tweet, they can complain to the CRTC and the tweet is removed. The same could be done with a podcast or even a broadcast.

These evil bills are really a couple of the greatest threats to personal freedom.

All those who push the Great Reset are all very bizarre, and not likeable.

With the exception of President Xi, all other progenitors of the Great Reset are only good at getting elected.

Governing by virtue signaling isn’t governing, as Tom so eloquently says. Whether it be Justin Trudeau or Kamala Harris, this is absolutely true.

Making the most politically correct statement, followed by throwing a flood of dollars at every problem, is a shortcut to actually thinking.

Governing and actually solving problems is very hard, difficult work. Those leaders that actually do that should be praised, especially in the sad climate of today.

Degradation of information is also a horrible problem across today’s media.

Democracy is based on fundamental distrust of government. The moment the government is left to their own devices, without any credible media oversight, then madness ensues.

Tom discusses his time in Yugoslavia, and how he used to brief journalists who believed in supporting a narrative rather than getting down to the truth and getting near the real action.

Because the product is mediocre.

Mike and Tom discuss the United Church of Canada flying an LGBTQ flag. Would Muslims tolerate this?

In the west, we really are being taught to be tolerant of intolerance.

Within political Islam, if one chooses to leave the faith they can be killed.

Should this be tolerated by westerners on our own soil?

Mike and Tom elaborate on all of this, and much more.

Listen to the full broadcast with Tom Quiggin here:

Find his book, The New Order Of Fear, here: