Active duty members of the Navy in San Diego were forced to take part in a mandatory ‘diversity hike’ during which they flew LGBT flags while American flags were nowhere to be seen.

“A woman whose husband is active duty Navy sent me this. His command held a “diversity hike” in honor of Pride Month. Attendance was mandatory. They hiked while waving a rainbow American flag,” tweeted Matt Walsh.

A woman whose husband is active duty Navy sent me this. His command held a “diversity hike” in honor of Pride Month. Attendance was mandatory. They hiked while waving a rainbow American flag. pic.twitter.com/ctx66HNoi5

As Chris Menahan explains, the event was promoted by the Construction Battalion Maintenance Unit 303, which celebrated “Pride Month” with a “Pride Hike” at Sunset Cliff last week.

The servicemembers were made to carry a version of the LGBT flag which incorporates the stars and stripes, although no actual American flag was flown.

A photo from the hike shows one of the men turning away from the camera, perhaps in protest at being forced to be involved.

This Chad right here refusing to face the camera. pic.twitter.com/qAno41Bzxx

“It appears as though in April male sailors in the same unit had to hold up these humiliating signs telling one another not to commit rape,” writes Menahan. 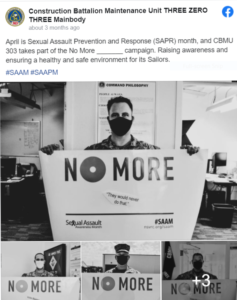 Secretary of Defense Lloyd Austin and Gen. Mark Milley, chairman of the Joint Chiefs of Staff, recently appeared before a House Armed Services Committee where he faced accusations that the U.S. military was going “woke”.

While attempting to deny the claim, Milley actually did everything to confirm it was true while also insisting he wanted to understand “white rage,” a concept invented by left-wing extremists as part of Critical Race Theory to denigrate white people.

As we highlighted last week, Nellis Air Force base responded to controversy about a drag queen show hosted by the base by saying the performance was “essential to the morale, cohesion, and readiness of the military.”

Attempts by the woke cult to subvert the military began under the Obama administration, during which in some instances cadets were made to take part in an event called Walk a Mile in Her Shoes, which sought to raise awareness for sexual assault victims by having men wearing Army Combat Uniforms parade around in red high heels.

But no, of course the military isn’t going woke, who would be stupid enough to even suggest that?

Meanwhile, China and Russia continue to laugh hysterically while training their soldiers to engage in elite combat.