A decorated former Toronto homicide detective is going public with the onslaught of vile harassment and abuse his family and that of a murder victim has allegedly suffered at the hands of a conspiracy nut relative.

David Perry, who investigated some of this city’s most high-profile murders, told The Toronto Sun on Monday that Gerald (Guy) Brummell, 57, has tormented his relatives, ex-wife, cops, judges and an army of others who have upset him.

Making the harassment even worse, the family is that of Matthew Staikos, who was murdered in Yorkville on May 28, 2018. The case remains unsolved.

“His father, Nick Staikos, retained my services and the services of my company to assist his family with a number of matters related to the murder of their son,” Perry told the Sun. “I have gotten to know this family quite well over the more than two-and-a-half years I have assisted them and they are wonderful people from all accounts.”

“He’s a nobody, quite frankly,” Perry said.

But a nobody with a computer can be dangerous and now cops are hunting Brummell, who has apparently made it his life’s mission to torment and harass individuals he feels have done him wrong.

“He’s an unemployed conspiracy theorist who has a significant history of harassment and threatening behaviour towards anybody he disagrees with,” Perry said, adding that Brummell is allegedly wanted by TPS for threatening two judges.

According to the former detective, when Brummell learned his investigative agency was looking for him, he turned his tinfoil hat in Perry’s direction and allegedly threatened one of his investigators. Then he turned on Perry, his company and a daughter who works for him.

“His beef is with everybody who looks and thinks differently from him. He has a long history of harassment, from OPP officers to family members. He’s has been a habitual harasser and cyber stalker,” Perry added.

Brummell is effectively homeless and couch surfs with like-minded people, Perry said. He is also barred from contacting his ex-wife and children.

The vitriol tapered off but now Brummell appears angrier than ever and his harassment has “really escalated,” Perry said.

A sampling of some the missives the gray-haired former YouTuber has sent are stomach-churning. His Twitter and YouTube channels (where he used the name Agent Mararitaville) have been shuttered by the networks.

In his flurry of missives, Brummell tells Perry his “life is coming to an end”; Perry and his daughter are “committing fraud” on the Staikos family and the “Galloway (sic) Boys” street gang; “we believe her desirability index for Scarborough Black Men will raise considerably” and on and on and on. 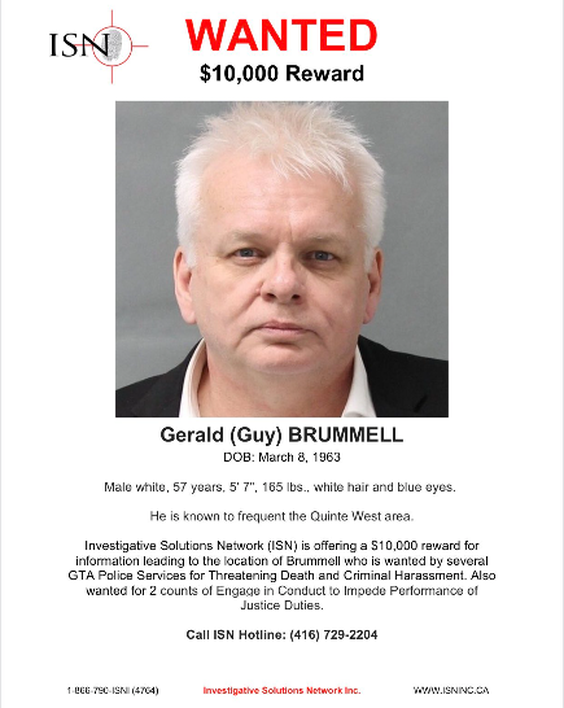 The emails and voice messages — allegedly from Brummell — airs his alleged desire for revenge on the ex-cop and his daughter. In some, the messages are signed “Scorpion.”

Now, Perry’s company is offering a $10,000 for information on the troll’s whereabouts.

Perry said he made the decision to go public because of the number of people Brummell was hurting and harassing, particularly the Staikos family who are still trying to come to grips with Matthew’s murder.

“Once you’re on his harassment radar, you’re there forever,” Perry said, adding that Brummell is more than likely hiding out in eastern Ontario, probably Belleville, Trenton or Kingston.

He added: “He’s dangerous, how dangerous is the unknown and whether he escalates his behavior. I’ve had to change everything in my life and I ask myself, ‘what is this guy truly capable of?’”