A middle school in Washington distributed flyers to 8th grade students teaching them that sex for kids as young as 11 is acceptable as long as the partners are under 14. The source of the flyer was Planned Parenthood who operated at the school in the past.

Stewart Middle School in Tacoma, WA, says the flyers were erroneously distributed by a new teacher who has now been disciplined in some way. But if the teacher was pulling from past materials, why were these flyers available now? Here’s a shot of the flyer:

Angry parents contacted the school’s administrators after 8th grade children brought home the graphic flyer from science class. The flyer also informed students that they could get an abortion at any age without parent consent.

The handout listed other items that children did not need parental consent for such as birth control, as well as HIV and STD testing. The flyer encouraged sexting and advertised that condoms and emergency contraception could be obtained at any age.

But arguably the biggest question that needs to be asked is if the flyer is accurate about age of consent, what in the world is wrong with the laws in Washington? Many 11-year-olds haven’t even gone through puberty. It doesn’t take a so-called rightwing extremist to realize pre-teens should not be having sex because they do not have the maturity to give proper consent. One can argue that the age of consent should be adulthood, but either way 11 is ridiculously low.

Livid parents contact the school as well as Tacoma Public Schools. In a response obtained by The Post Millennial, Eric Hogan, assistant director of secondary education at Tacoma Public Schools said that the flyer was not part of the curriculum and should not have been sent home with students. 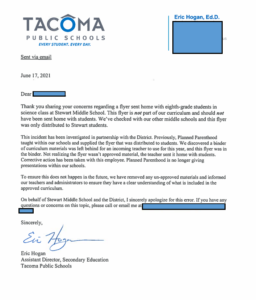 After an investigation Hogan said, “Previously, Planned Parenthood taught within our schools and supplied the slyer which was distributed to students. We discovered a binder of curriculum materials was left behind for an incoming teacher to use for this year, and the flyer was in the binder.”

Hogan added that the teacher did not realize that the flyer was not approved and that “corrective action” had been taken against the employee. Hogan added that Planned Parenthood was no longer giving presentations within their schools. The director apologized and noted that unapproved curriculum had been removed and faculty had been instructed on what was included in approved material.

Informed Parents of Washington, objected to the early sexualization of children in the curriculum, as well as the graphic material and warned of the possibility of grooming young children for early sexual experiences.

One of the most important goals of Cultural Marxists is to diminish the self-respect and conservative values that are developing in children at various stages. They do this through television, the internet, video games, books, and pretty much every venue through which children consume media. But the most powerful weapon they have in their arsenal are “woke” teachers, administration, and school board members who continue to push extreme progressivism onto children.

They want kids to be able to choose their gender at any age. They want them having sex as quickly as possible. They want to remove their innocence, replaced with a nihilistic sense of hopelessness so they can grow to be the Neo-Marxists of the future.

It’s always an “oops” moment when public school educators and administrators are caught spreading their Cultural Marxist message. But they only consider it a mistake when they get caught.