The driver arrested in an alleged hate-motivated attack that killed four family members in London laughed as police took him into custody in a mall parking lot, a traumatized taxi driver who witnessed the arrest told his boss.

The cabbie was parked outside Cherryhill Village Mall on Oxford Street for a coffee break shortly before 9 p.m. Sunday when a black pickup truck entered the nearly deserted lot and parked behind him, Yellow Taxi London president Hassan Savehilaghi told The Free Press, speaking for the taxi driver.

A veteran cabbie and father of two, he asked that Savehilaghi speak on his behalf because he’s still too traumatized to speak publicly about what he witnessed.

The pickup driver was wearing what appeared to be a bullet-proof vest, a military-style helmet and clothing that perhaps had swastikas on it, Savehilaghi said he was told by the cabbie. 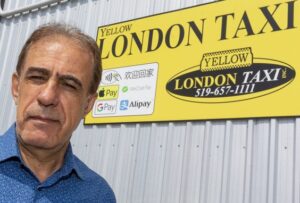 The pickup driver told the cabbie, who was out of his vehicle lighting a cigarette, to call police, saying he’d just killed someone.

“It was damaged with blood,” Savehilaghi said of the pickup’s front end, adding the cab driver said he thought the vehicle was involved in a hit-and-run and called 911.

John Dennett, a maintenance worker at the mall, said he also spoke with the cabbie and corroborated the details Savehilaghi provided.

While on the phone with a police dispatcher, the cabbie saw a cruiser heading west on Oxford Street and ran to flag it down.

The officer pulled into the parking lot and reinforcements quickly arrived before the arrest.

“When they got him out of the vehicle, he was laughing,” Savehilaghi said, adding the suspect asked the cabbie to record his arrest.

The cab driver, who works the night shift, gave a statement to police, then immediately went home and hasn’t returned to work since the incident, Savehilaghi said. “He’s really traumatized. It is terrifying. You’re all by yourself.”

That description of the pickup driver is a far cry from what friends said of Nathaniel Veltman, a 20-year-old man who is charged in the deadly collision earlier that night. Veltman is charged with four counts of first-degree murder and one count of attempted murder.

Veltman has entered no plea in court and none of the charges against him has gone to trial.

“Nate is not a radical terrorist. He is nothing like that. He is not an Islamophobe. That’s not who this kid is,” said one friend.

The friend, who hails from the Middle East, said he never heard Veltman say a bad thing about the Middle East or Muslims. “Nate was a very close friend and never said anything bad to me,” the man said.

Another friend said Veltman “never said anything hateful” about any groups.

“He’s Christian and has a great relationship with God. . . . He was always pretty calm towards other people,” that friend said.

Both men asked to remain anonymous. One of the two is a co-worker with Veltman but would not identify their employer.

“The management and staff of Gray Ridge Eggs were shocked and saddened to learn late Monday afternoon that Nathaniel Veltman . . . has been arrested and charged with four counts of first-degree murder and one count of attempted murder,” chief executive William Gray said in a written statement.

“We join our community in expressing our condemnation of this violent attack and offer our heartfelt sympathy to the family and the Muslim community.”

Only a few weeks ago, Veltman went fishing with friends and seemed to them as happy as ever, the co-worker said. A photo from that trip shows a smiling Veltman showing off his catch.

This past Thursday – three days before the fatal attack – Veltman was having trouble with the steering of his new truck, the co-worker said. “I actually drove with him on Thursday.”

He said on Friday, Veltman asked him to finish his work for him because a family member, maybe his grandmother or great-grandmother, had died, the man said.

“He seemed broken up over it on Friday. That’s the last time I saw him.”

An obituary from a Strathroy funeral home confirmed the death Friday of a 101-year-old woman, who has several descendants named Veltman. The obituary suggests Nathaniel Veltman was one of 21 great-grandchildren, with at least a half dozen aunts and uncles.

The co-worker said he heard from other workers that Veltman showed up for a day shift Sunday – the fatal attack was that night – and seemed OK.

He also heard that Veltman might have played airsoft, a competitive shooting game like paintball that uses less harmful soft pellets, after work, the co-worker said.

Police have confirmed the driver was wearing a body-armour-style vest at the time of his arrest, but a police spokesperson declined to say whether he was also wearing anything depicting swastikas.

Aside from fishing now and then, playing airsoft and some video games before bed — usually late at night after a 4 p.m.-to-midnight shift — Veltman was mainly a gentle introvert, the co-worker said.

The two would have discussions about faith, but Veltman never pushed his own beliefs, the man said. “He wasn’t an extreme Christian. He never seemed to hate people, He never said anything hateful. It seems completely out of his character.”

Other co-workers were shocked Monday to learn of the arrest, the man said. “He’s not a violent guy. He’s a bit high-strung sometimes, but other than that, he’s a good guy. He gets along with everybody at work.”

Veltman grew up in Strathroy and moved to London about six months ago to go to Fanshawe College, the man said.

A pair of neighbours earlier told The Free Press Veltman lived alone in his unit and described him as an introverted white man who played video games and rarely interacted with those living nearby.

One neighbour said Veltman made too much noise at night, sometimes as late as 3 a.m.

A resident of the building, who identified herself only as Emily, said Tuesday she was shocked to learn the man accused of Sunday’s killing lived in her building. She also confirmed a picture shown to her was Veltman.

“It is disgusting,” she said. “I can’t pretend to even understand what this family is going through.”

Emily described Veltman as “quiet and I could tell he was a little awkward.”

“I thought he was shy but didn’t really think twice about it,” she said.