SECESSION: Oregon Counties Will Vote To Secede From Oregon This November And Join “GREATER IDAHO”

State lines have been relocated many times in American history, because it just takes an interstate compact between two state legislatures and approval of Congress. We explain more in the first two pages of our proposal (pdf).  Our strategy for accomplishing it is here.

This proposal is simply a shift in borders that does not affect the balance of power in the US Senate. It does not create a new state or increase the number of states. Borders between states have been relocated many times in US history. If a deal were made that two state legislatures pass, a border change would almost certainly become a reality. According to a peer-reviewed law journal, “Prior to 1921, 36 compacts between states were put into effect with the consent of Congress; virtually all of these settled boundaries between contiguous states.” These interstate compacts are constitutional according to Article 1,section 10 of the US Constitution. See link. 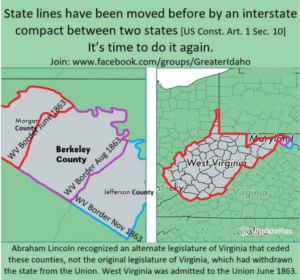 1) Harney County, Oregon will vote on Greater Idaho this November

Harney County, Oregon will vote on Greater Idaho this November

Harney County will vote this November on the “Greater Idaho” concept of moving the Oregon/Idaho border, as a group called Move Oregon’s Border has collected the required number of signatures, the Harney County Clerk announced in a press release.  He awarded the measure a number: 13-18, and wrote that “The question to be voted on by the people of Harney County is: Shall the County Court meet three times annually to discuss promoting Harney County’s interests regarding relocation of the state border?”

Move Oregon’s Border is still collecting signatures in six counties: Curry, Josephine, Douglas, Klamath, Morrow, and Umatilla counties, according to the organization’s website greateridaho.org .  Voters in seven Oregon counties have already voted in favor of the Greater Idaho concept.  The five counties that voted in May averaged 62% in favor.

The ballot measures are a part of an effort to move the Oregon/Idaho border to extend Idaho’s jurisdiction over rural, conservative counties of eastern and southern Oregon. The ballot measures are intended to put pressure on the state legislatures of Oregon and Idaho to negotiate an interstate compact to relocate their common border.  “Idaho’s government would defend us from the radical Left’s cultural revolution and preserve our way of life – Oregon’s government wouldn’t,” said Mike McCarter, president of Move Oregon’s Border and Citizens for Greater Idaho.  “We may be able to convince northwestern Oregon to let eastern and southern Oregon counties go. Because if they do, then the state income tax revenue would improve by $367 per wage earner annually, because the per capita personal income of these counties is only as high as Idaho’s. Is northwestern Oregon willing to forego that, just to keep Oregon looking big on a map?  How does keeping our counties under the governance of Salem improve their lives in any way?”

In 5 counties where Move Oregon’s Border didn’t get permission to circulate a petition, the group is requesting that county commissioners refer a question about Greater Idaho to their ballots, including the counties of Coos, Crook, Wheeler, Gilliam, and Wallowa. They are asking the same of the city councils of the cities of La Pine, Redmond, Maupin, Rogue River, Gold Hill, Central Point, Eagle Point, and Shady Cove.

Citizens for Greater Idaho, a sister group of Move Oregon’s Border, announced that they will be bringing hundreds of citizens to attend the August 4 Crook County Court meeting to confront county commissioners on their reluctance to refer a non-binding advisory question to the November 2021 ballot.  This is the last meeting before the deadline for referring measures to the November 2021 ballot.  Move Oregon’s Border‘s ballot initiative was not given permission to circulate by the county, so in June Citizens for Greater Idaho began collecting Crook County signatures and email addresses on an unofficial list of proponents.  Citizens for Greater Idaho announced they already have 1200 email addresses of Crook County citizens who want to vote on the issue, which will be used to invite citizens to the meeting. For more information on the Crook County Court meeting, visit greateridaho.org

Approximately fifty supporters of Greater Idaho attended the April 21 Crook County meeting.  At that meeting, a member of the Crook County Court, Judge Seth Crawford, asserted that the Court has no authority to refer a non-binding advisory question to the ballot.  Subsequently, the Court had a Portland lawyer, Peter O. Watts, issue a letter listing irrelevant cases to justify this position. However, the letter doesn’t mention the longstanding guidance of the Attorney General of Oregon that all Oregon counties have the authority to refer non-binding advisory questions to county ballots, which was subsequently acknowledged by that lawyer in an email. Indeed, the Douglas County Board of Commissioners referred an advisory question to their November 2020 ballot, as other counties have done earlier.

In June, Crook County residents entered a float into the local rodeo parade asking the County Court to let the county vote on the Greater Idaho issue.

As required by the measure approved by Grant County voters in May, the Grant County Court will meet August 4 at 9 AM to discuss the “Greater Idaho” concept of moving the Oregon/Idaho border. The public is invited to attend in person at the Courthouse in Canyon City to provide comments on the idea.