After 111 years, an overdue book returns to an Idaho library

NORTH BAY — The life of one library book in Idaho has come full circle after the novel was recently returned more than a century after it was taken out.

The book, “New Chronicles of Rebecca” by American author Kate Douglas Wiggin, was originally checked out from the Boise Carnegie Public Library in 1910. It was returned earlier this month, much to the surprise of library employees.

In a Facebook post, the Boise Public Library stated that with a fine of two cents per day, the individual who checked out the book would have owed US$803.

But, as the library added, “thank goodness the Boise Public Libraries are now fine free.”

Canada has also had its fair share of late library book returns, which often occur after someone has cleaned out old belongings.

Just this month, the Vancouver Public Library received an overdue book at its Collingwood branch nearly 70 years after it was checked out. The book, titled “Audel’s Mechanical Drawing Guide,” was 68 years and seven months overdue.

Back in January, a copy of Dr. Doolittle was returned to the McConnell Sydney Library in Nova Scotia 82 years late. The fee, based on a charge of 15 cents a day, would have amounted to about $3,000.

In 2019, a copy of Ernest Hemingway’s “For Whom the Bell Tolls” was returned anonymously with a handwritten apology to the Northern District branch of the Toronto Public Library 32 years overdue. Based on a fine then of 35 cents a day, the return would have racked up a late fee of more than $4,000, although the cap at the time was about $14.

That same year, an overdue copy of “Relax and Live,” a self-help book for relieving tension and getting better sleep, was returned after 63 years in Moncton, N.B.

One retired librarian returned a book, a worn-out copy of “The Postman” by Charlotte Kuh, in 2019 after taking it out from Maryland’s Silver Spring library 73 years ago.

Meanwhile, in 2018, a man in Louisiana returned a copy of “Spoon River Anthology” by Edgar Lee Masters that was originally taken out from the Shreve Memorial Library by the man’s late mother in 1934. 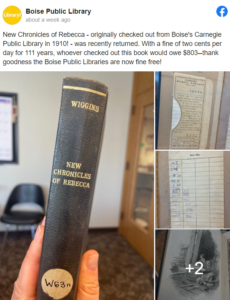 The library’s rules at the time charged users five cents per day in late fees, which in this case would have amounted to just over US$1,500.

Although the library did waive its maximum fine of US$3, the man and his family donated US$1,542.65 to the library in honour of his mother.