A French journalist who returned from Ukraine after arriving with volunteer fighters told broadcaster CNews that Americans are directly “in charge” of the war on the ground.

The assertion was made by Le Figaro senior international correspondent Georges Malbrunot.

Malbrunot said he had accompanied French volunteer fighters, two of whom had previously fought against ISIS.

“I had the surprise, and so did they, to discover that to be able to enter the Ukrainian army, well it’s the Americans who are in charge,” said Malbrunot.

French reporter returning from Ukraine "Americans are directly in charge of the war on the ground." pic.twitter.com/m5yr7far6N

Adding that he and the volunteers “almost got arrested” by the Americans, who asserted they were in charge, the journalist then revealed that they were forced to sign a contract “until the end of the war.”

“And who is in charge? It’s the Americans, I saw it with my own eyes,” said Malbrunot, adding, “I thought I was with the international brigades, and I found myself facing the Pentagon.”

Malbrunot also mentioned America providing Ukraine with switchblade suicide drones, something highlighted by Defense Secretary Lloyd Austin in a tweet that revealed Ukrainian soldiers were being trained to use the devices in Biloxi, Mississippi.

Citing a French intelligence source, Malbrunot also tweeted that British SAS units “have been present in Ukraine since the beginning of the war, as did the American Deltas.”

Russia is apparently well aware of the “secret war” being waged in Ukraine by foreign commandos who have been in the region since February. 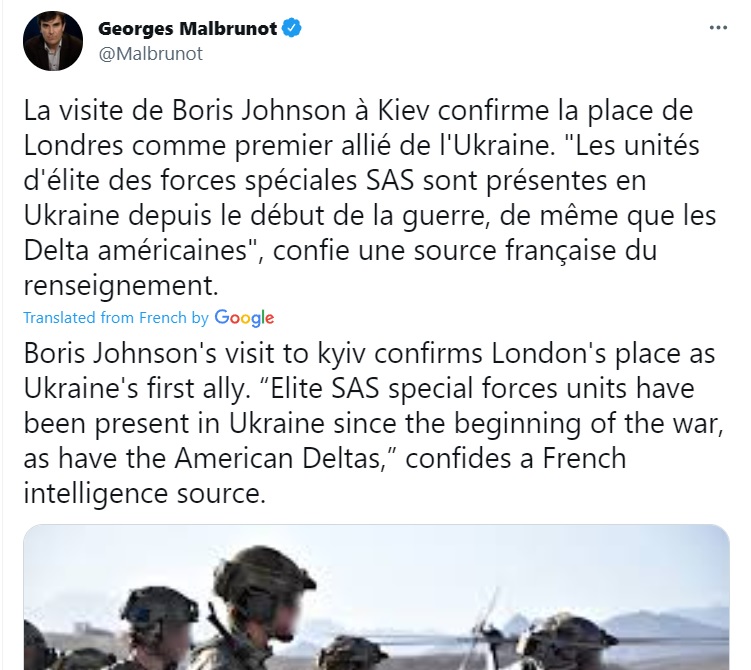 Both the United States and the UK have publicly asserted that there won’t be “boots on the ground” in Ukraine, but apparently there has been a US-UK military presence since the start of the war.

“Polls showed in the run up to the war the overwhelming majority of Americans wanted our government to stay out of it but our leaders know best and are more than happy to risk World War III in defense of Ukraine’s puppet regime,” writes Chris Menahan.