Red sprites are a rare natural phenomenon when huge electrical discharges occur high in the atmosphere above cumulonimbus thunderstorm clouds.

Residents in the US state of Arkansas were lucky to observe unusual lightning earlier this month. They saw a rare kind of lightning which is known as red sprites. 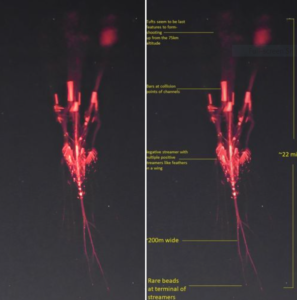 However, not everyone who observed the sprites thought they were simply beautiful and impressive – some suggested that the figures looked more as though the devil had put his signature in the sky.