Constitutional Attorney Luis Ewing, who is notable in fighting against vaccine mandates and medical tyranny against Washington Governor Inslee and Oregon Governor Kate Brown, appears to have been held as a medical hostage at Multicare Medical Center in Auburn, Washington.

Mr. Ewing’s personal nurse advocate and power of attorney described everything in her interview with social media personality, Christopher Key.

Here’s an excerpt from the video below:

AT 1 am, he was very sick at that we were working with other people and a doctor who’s amazing who helped to him as fast as possible to get him on FLCCC protocol, get him oxygen, give him everything that he needed to recover. He started responding after we got him an Ivermectin, and he just started perking out. He did better. I just couldn’t get his O2 level high enough.

By Wednesday morning, his O2 level had dropped too much to where he was at risk of cardiac arrest. At that point, I called my friends who were helping me. We all agreed that we are honoring and respecting his wishes, all of us at the hospitals, we all know better.

We just wanted the fire department to come out, assess him and get his oxygen levels up. When they came out, they said, this man is really sick. I said we’re not admitting him to a hospital. We’re not doing anything like that. I just want him to sit there until I get there and get his oxygen levels up. And they said they agree to that. And just in case, I wrote on his chest “No Remdesivir” and “no venting”. I just didn’t trust them and I’m like, I swear to God anything happens to him. They got his numbers up to like 95.

By the time I got to the hospital, they had him vented and justified it saying he’s so sick, it’s COVId and all this bullsh*t. I lost my sh*t. I was adamant. I called you guys. I told you no venting. It’s written on him.

I was very out of it about that. The vent is especially too much air. It is going to hurt him. I said, get him off of it now. I stopped him.

The nurse came in after Luis has not been under any sedation for 2 hours. He was successfully being… with Fentanyl started to push it. I said this man is fighting to get off this vent.  He’s halfway off of it and I took pictures of everything of all his vitals. He was doing so good.

So after the fentanyl thing, all of a sudden the nurse shows up says you have to leave now. We’re going to arrest you.“

In a viral photo, “Amber King” reported that Mr. Ewing was first checked in at a small hospital in Aberdeen with COVID symptoms. At the time, his personal nurse advocate and power of attorney was with him but then later was denied access. They gave him fentanyl immediately and put him on a ventilator and worsened his condition. He was later on transferred to Multicare Medical Center where communication is cut off to Luis and his doctors.

Mr. Ewing’s nurse advocate made it clear that he did not want to be put on a ventilator and want to follow FLCCC (Front Line COVID-19 Critical Care Alliance) protocol for covid patients and yet the two hospitals did not honor his directive.

One of Mr. Ewing’s friends, Tiffany Galloway, posted a notice on Multicare Health System’s Facebook page. She threatened the hospital asserting that they will file criminal charges accordingly if they fail to honor Mr. Ewing’s right.

I am advocating for a patient in the ER named Luis Ewing. We have been made aware of the obstruction of S.4945 The Compassion Care Act and SB-5035, the Right-To-Try Act which gives those whom are terminally ill, the right to any and all experimental medications that have passed the Phase 1 test and can vast effect a positive outcome for the patient.

Your staff has been dishonoring Mr. Ewing’s wishes which have also been instructed to his power of attorney and medical power of attorney as well as the voices of concerned friends, including blatant dishonor and disregard for his own blood relatives.

It is hereby demanded, according to the law that you give Luis the treatment that HE and his POA have set forth and that arrangements be made to stabilize him and return him to the care of his loved ones.

Luis Ewing, 59, is very bold in his stands against the COVID vaccine mandate and medical tyranny. On his Facebook post, he explained that he is not a regular State Bar Attorney nor has he ever taken or passed any State Bar Examination nor has he ever joined the criminally ‘corrupt Washington Bar Association’.But he is “authorized to practice law” under “the common law rule”. He even purposely let his Bar memberships expire because he doesn’t want to be affiliated with ‘conspiracy with any bar association’. 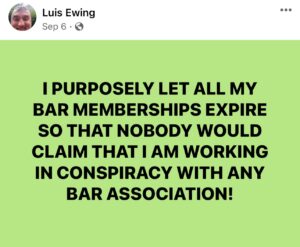 A group of his supporters is rallying to protest because the hospital is holding him against his will. Call the hospital and demand to follow his will.

Here is the conversation between Christopher Key and Luis Ewing’s personal nurse advocate and power of attorney regarding the terrible situation of Mr. Ewing’s hospitalization.