Creepy whisper voice and white power symbol? What was up with Joe last night?

If President Joe Biden is to be judged by the standards set forth by the mainstream left, then he might be a white supremacist — a whispering, lying one to boot.

The left has for years claimed that the OK hand gesture — in which the thumb and index finger touch to form a circle, and the remaining three fingers point outward — is a hate symbol used by white supremacists.

Yet during CNN’s town hall with the president on Thursday, the president used this very symbol while aggressively whispering a lie to the public about corporate taxes.

“You’re in a circumstance where corporate America is not paying their fair share. And I come from the corporate state of the world, Delaware. More corporations in Delaware than every other state in the union combined, OK?” he said normally.

“Now, here’s the deal, though. You have 55 corporations, for example, in the United States of America making over $40 billion don’t pay a cent,” he then added, bursting into an aggressive whisper as he held up the OK sign. 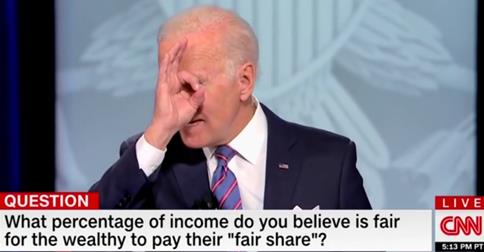 CNN’s Anderson Cooper took no note of the president’s use of the alleged white supremacist symbol, despite the network having previously run multiple stories about the symbol’s ties to “hate.”

Back in January, the left-wing “news” site even linked the Jan. 6th rioters to the symbol.

“A photo from the riot at the US Capitol shows several people making the OK hand gesture. Some of the people in the photo are also seen in a livestream from the rally, where they identify themselves as members of the Proud Boys, specifically the Arizona chapter,” the CNN piece read.

It added that the gesture had been “co-opted” by some “as a symbol of white power.”

Could “some” include Joe Biden? Some Americans certainly seem to think so:

I’m old enough to remember when we were told emphatically that anyone making this hand gesture is a White Supremacist.

Though in fairness, these Americans are probably just trolling to give the left a taste of their own medicine. To be clear, Biden isn’t the first Democrat (or Republican) to use this symbol. It’s in fact a commonly used symbol. But thanks to “woke” culture, it’s a commonly used symbol now dubiously linked to white supremacy.

The president’s remarks Thursday were also not the first time that he’d suddenly burst into an aggressive whisper. This bizarre whispering habit of his first emerged during a press briefing in late June and then emerged again the following month as he was speaking to a child.

While in the middle of touring a children’s learning center at McHenry County College on the outskirts of northwest Chicago on July 8th, the president suddenly turned toward a child and exclaimed, “And oh, by the way, you know what?”

He then clumsily sauntered over to the child, leaned forward, put his hands on his knees, and began whispering.

“We gotta take care of mommy, right? Yeah, I know. How old are you? Twelve? Fourteen? Oh, four! That’s great. Great,” he whispered.

Some believe he’d whispered, “I gotta take your mommy.”

But the president’s behavior during Wednesday’s town hall wasn’t just bizarre and apparently racist (going by the left’s standards); it was also false.

It’s not true that major corporations pay no federal taxes. It is true that corporations sometimes wind up with a zero federal tax liability, but that’s a result of them factoring in tax credits for overseas profits, in addition to their net operating losses, their investments, and other relevant deductions that reduce their liability.

Furthermore, it’s not true that major corporations are swimming in profit. According to the Tax Foundation, corporations “report what’s called ‘book income’ on their financial statements, which follow typical U.S. accounting standards and are designed to make companies appear as profitable as possible to shareholders.”

“However, the tax code operates under different accounting rules. For tax purposes, governments use what’s called ‘taxable income,’ which is defined by law and accounts for three important factors,” the foundation notes.

And so, according to the foundation, a zero federal tax liability isn’t the result of greedy profit hoarding but rather the result of “a combination of both zero or negative book income and either net operating losses, significant foreign profits, sizable capital investments, or all of the above.”

However, just as this administration routinely ignores the actual science regarding the coronavirus, it also seems to be ignoring the facts regarding corporate taxes.