Ellen Page Shows Off Her Mutilated Body, and the Media Celebrates

Back in December, Canadian actress Ellen Page announced she was transgender, identifies as a male, and wanted to be called “Elliot Page” henceforth.

The media fell all over themselves to celebrate her “coming out” as a transgender, after having previously come out as a lesbian, and before coming out as a talented actress. Her IMDB and Wikipedia pages were quickly updated to reflect this new identity she had chosen for herself. It felt like a nightmare right out of Orwell’s 1984, with Page’s female status being thrown down the memory hole, as if we are supposed to forget her extensive filmography as a female actress playing female characters. Though, who knows if George Lucas will handle the special edition versions of her films to erase her female identity.

Anyway, at the time of her coming out as transgender, she made no mention of any plans to undergo hormone treatments or any cosmetic surgeries to “transition,” but on Tuesday she shared a shirtless photo of herself, having clearly undergone and recovered from “top surgery.” 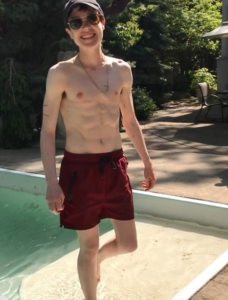 The photo has acquired over 2.3 million over the course of 19 hours.

Just as disturbing as the incredible number of likes Page’s post showing off her mutilated body got is the way the media rushed to celebrate it.

And then there’s my favorite from Men’s Health magazine: “Elliot Page Celebrated His First Pair of Swim Trunks With a Shirtless Instagram Pic.”

“Photos of actors showing off their six-packs aren’t exactly a rarity on Instagram, but the latest ab-baring image to go viral actually marks a major moment—both for actor Elliot Page and for trans visibility,” wrote Katie Dupere of Men’s Health. “On May 24, Page posted a shirtless photo on Instagram to celebrate his first pair of swim trunks, sharing his top surgery results at the same time.”

Is Ellen Page going to win some Man of the Year award next? It’s probably in the works right now.

This disturbing display of validation of Ellen Page’s delusion is only the latest example of the media’s unified efforts to validate the delusions of the high-profile people who identify as transgender. Despite the recent 60 Minutes segment on transition regret on CBS News, the media overwhelmingly placates these delusions by referring to Page, or Bruce Jenner, by their “preferred pronouns,” while the rest of us are left wondering if there are any sane people left who will speak out against this nonsense.