Documents uncovered by the organization found that the National Institutes of Health division that is led by Dr. Fauci shipped part of a $375,800 grant to the lab in Tunisia to infest beagles with parasites.

The grant money funded a study published last month that detailed the horror inflicted upon the unlucky dogs.

One of the tortures that the beagles were subjected to included locking their heads in mesh cages filled with infected sand flies so that the parasite-carrying insects could eat them alive.

Beagles are often used for these tests because of their gentle nature, even towards those who harm them.

There was a photo of the test, which is sure to haunt anyone with a conscience. 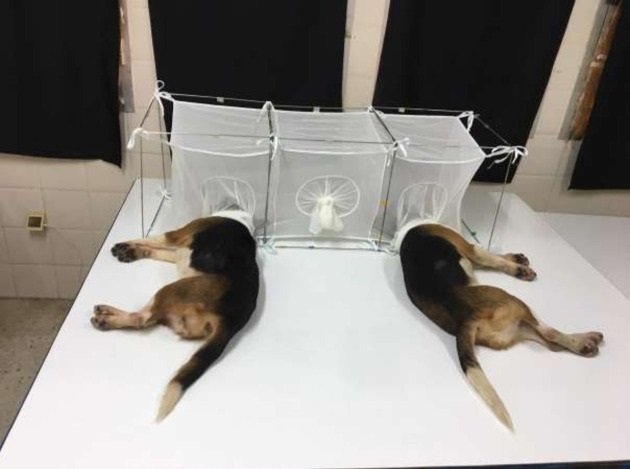 According to their paper, the scientists starved the sand flies in order to make sure they were hungry enough to attack the dogs.

“The sand flies were then allowed to feed on the sedated dogs….” the report explains.

The nightmare for dogs did not stop there. The experimenters locked beagles alone in cages in the middle of the desert, isolated, for nine consecutive nights, to use as bait to attract more infectious sand flies. There is also a photo of this horror.

“Fauci’s dog testing debacle is now an international disgrace. Not only is Fauci paying for beagle abuse here at home, but he also shipped our tax dollars overseas to have beagles eaten alive by insects in an African lab with no oversight from U.S. authorities. Taxpayers shouldn’t be forced to foot the bill for this government waste and abuse. Congress must take action to investigate the full extent of Fauci’s dog testing debacle,” Mackie Burr, Director of Digital & Grassroots Development at the White Coat Waste Project said.

The article’s “Funding Statement” confirmed that it was given money by the National Institute of Allergy and Infectious Diseases and that NIH funding was given to the lab in Tunisia.

“EZ and AS received funding from the US National Institutes of Health,” according to the grant. “EZ” is one of the paper’s co-authors, Elyes Zhioua, from the Institut Pasteur de Tunis, Tunis, Tunisia. “AS” is Abhay Satoskar, from Ohio State University.

White Coat Waste Project pointed out that on the NIH’s website, Zhioua is listed as the co-PI on the grant along with Satoskar.

White Coat Waste Project, using the Freedom of Information Act, recently revealed that Fauci spent $424,000 to commission another study in which healthy beagles were given an experimental drug and intentionally infested with flies that carry a disease-causing parasite that affects humans.

The researchers are developing infections in 28 beagles and allowing them to suffer for three months before being euthanized.

The report from White Coat Waste Project explained that records show that the dogs were “vocalizing in pain” during the experiments.

The organization also noted that experimenters admit this investigational drug, “has been extensively tested and confirmed…in different animal models such as mice…Mongolian gerbils…and rhesus macaques….” Meaning that this painful torture is completely unnecessary.

In a letter sent to Fauci last week, Congressman Scott Perry and 14 colleagues cited their investigation and demanded answers about the project — including has much money has been spent to date, how many dogs have been killed, and why the NIH commissioned the deadly dog testing when the Food and Drug Administration has said it’s not required.

Fauci and the NIH have also been under fire for using American tax dollars to fund the Wuhan Animal Lab’s coronavirus experiments on bats and other animals.