Experts divided on whether Quebec can change Constitution to claim nationhood

Prime Minister Justin Trudeau said Tuesday that Quebec can unilaterally rewrite certain sections of the Constitution to insert new provisions establishing the province as a “nation” and enshrining French as its “only” official language.

Trudeau made the comments in response to a reporter’s question about a proposed reform to Quebec’s language law being championed by the CAQ government of François Legault. Introduced last week, Bill 96 would proclaim Quebec a nation and “affirm that the only official language of Québec is French.” Within the 100-page bill are a pair of clauses that Quebec’s National Assembly proposes to forward to Ottawa with the expectation that they would be pasted into Canada’s Constitution.

Specifically, in Section 90 (a part of the Constitution that governs provincial jurisdiction) Quebec proposes to add two new subsections: 90Q.1, which says that “Quebecers form a nation” and 90Q.2, which says that “French shall be the only official language of Quebec. It is also the common language of the Quebec nation.”

The specific part of Bill 96 proposing to amend the Canadian Constitution. It’s the first time provincial legislation has sought to automatically amend a federal law, much less the Constitution.

Trudeau said Tuesday that his government shares Quebec’s views on both nationhood and the protection of the French language, but added that the province would still need to recognize parts of the Constitution that extend protections to “linguistic minorities like Anglophones in Quebec.”

Bill 96 has been pitched as a tougher version of Bill 101, the 1977 law that inaugurated strict French-language protections across Quebec in order to make French the “normal and everyday language of work, instruction, communication, commerce and business.” Among a battery of stricter French-language provisions for signage and commerce, Bill 96 also pledges to make living in French a provincially recognized human right and to “extend francization to enterprises employing 25 or more persons.” 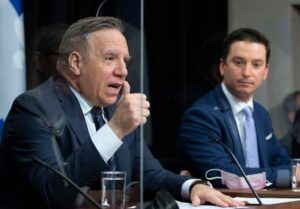 Quebec Premier Francois Legault, left, speaks during a news conference after tabling a reform on language law, Thursday, May 13, 2021 at the legislature in Quebec City. Quebec Justice Minister Simon Jolin-Barrette, responsible for language law, right, looks on. PHOTO BY THE CANADIAN PRESS/JACQUES BOISSINOT

Canada’s Constitution allows provinces to ignore certain sections using the Notwithstanding Clause — the only national constitution in the world with such a feature. Nevertheless, on the rare occasion that the document has been altered since its 1982 patriation, it’s been done via Constitutional amendment.

Canada has one of the world’s most difficult-to-amend Constitutions: On core matters such as the retention of the Senate or the monarchy, any reform requires unanimous consent of the provinces as well as passage in the House of Commons.

However, things get a bit easier when it comes to matters than only affect one province: All it needs is a yay vote from the House of Commons, the Senate and the legislature of the province in question. For instance, that’s what happened in 2001 when every mention of “Newfoundland” in the Constitution was changed to instead read “Newfoundland and Labrador.”