A Gold Star Mother who’s been deeply critical of the administration’s role in the bungled Afghanistan pullout that led to her son’s death was censored on social media following a post lambasting Biden.

On Monday, Shana Chappell, the mother of fallen Marine Kareem Nikoui, reported via Facebook that old posts on her Instagram account were mysteriously being flagged after she began gaining followers and posting about her son.

The post honoring her son was described by the New York Times prior to its deletion.

“On Friday, Kareem Nikoui’s mother, Shana Chappell, posted a photo on her Instagram account of her son with a broad smile, cradling his rifle amid the crowds of civilians and razor wire at the gate of the airport in Kabul. “This is the last picture my son sent me of himself. It was taken on Sunday. I know i am still in shock right now. I felt my soul leave my body as i was screaming that it can’t be true! No mother, no parent should ever have to hear that their child is gone,” she wrote in the post.” 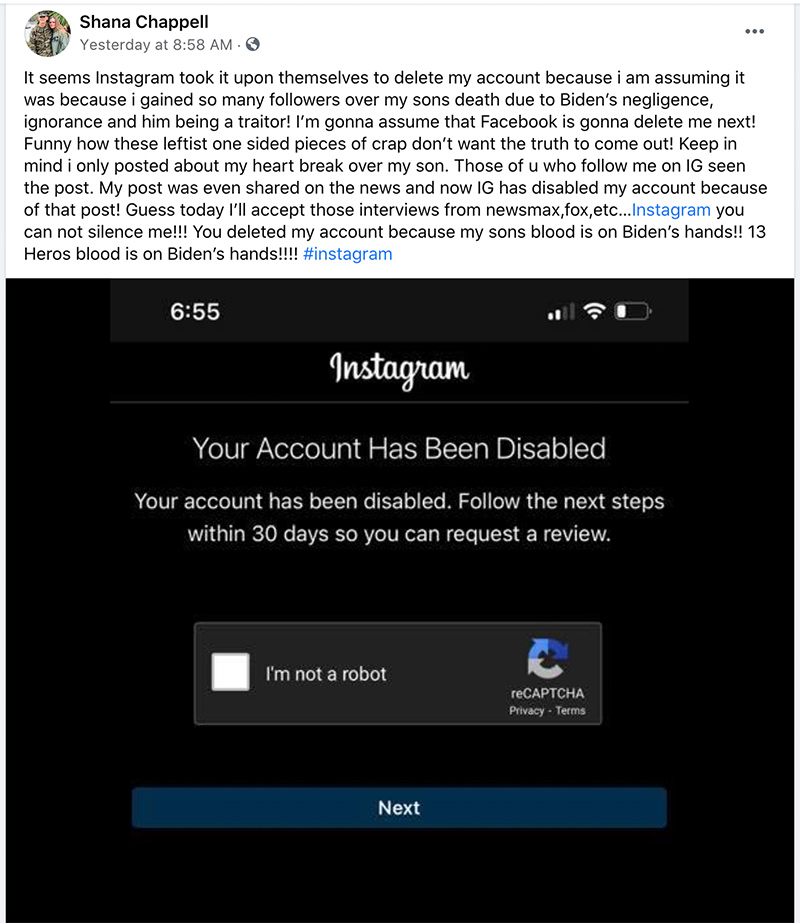 “We express our deepest condolences to Ms. Chappell and her family,” an Instagram spokesperson said in a statement obtained by Breitbart News. “Her tribute to her heroic son does not violate any of our policies. While the post was not removed, her account was incorrectly deleted and we have since restored it.”

Chappell’s suspension came after a Facebook post Monday in which she detailed being disrespected by Joe Biden during a meeting with him.

“This msg is for you!” Chappell said, addressing her post directly to Biden.

“I know my face is etched into your brain! I was able to look you straight in the eyes yesterday and have words with you. After I lay my son to rest you will be seeing me again! Remember I am the one who stood 5 inches from your face and was letting you know I would never get to hug my son again, hear his laugh and then you tried to interrupt me and give me your own sob story and I had to tell you ‘that this isn’t about you so don’t make it about you!!!’” she wrote.

“You then said you just wanted me to know that you know how I feel and I let you know that you don’t know how I feel and you do not have the right to tell me you know how I feel! U then rolled your fucking eyes in your head like you were annoyed with me and I let you know that the only reason I was talking to you was out of respect for my son and that was the only reason why, I then proceeded to tell you again how you took my son away from me and how I will never get to hug him, kiss him, laugh with him again, etc…. U turned to walk away and I let you know my sons blood was on your hands and you threw your hands up behind you as you walked away from me like you were saying ” ok whatever!!!” You are not the president of the United States of America Biden!!!! Cheating isn’t winning!!! You are no leader of any kind! You are a weak human being and a traitor!!!! You turned your back on my son, on all of our Heros!!! You are leaving the White House one way or another because you do not belong there! MY SONS BLOOD IS ON YOUR HANDS!!! All 13 of them, their blood is on your hands!!!! If my president Trump was in his rightful seat then my son and the other Heros would still be alive!!!! You will be seeing me again very soon!!! Btw as my son and the rest of our fallen Heros were being taken off the plane yesterday I watched you disrespect us all 5 different times by checking your watch!!! What the fuck was so important that you had to keep looking at your watch???? You are nobody special Biden!!! America Hates you!!!!!