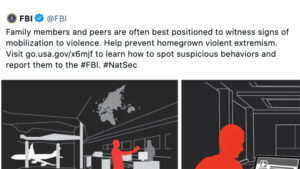 The FBI fired out a tweet Sunday afternoon urging Americans to check on their own family members and make sure they aren’t planning any ‘extremism’, prompting a wave of comparisons to authoritarian communist governments.

The wording of the tweet, which links to a Department of National Intelligence (DNI) “booklet” about “homegrown violent extremism” is clear.

Family members and peers are often best positioned to witness signs of mobilization to violence. Help prevent homegrown violent extremism. Visit https://t.co/bql36iSbig to learn how to spot suspicious behaviors and report them to the #FBI. #NatSec pic.twitter.com/ZwJp5h5bWD

Yet there is a distinct ‘Hey Americans, spy on your families for the government’ vibe in the FBI tweet, as numerous detractors noted:

In both Cuba & China, they also ask children to spy on their parents…. https://t.co/ss9TKNEBlz

This is outrageous. The @FBI has a growing credibility problem and this type of sinister snitching is clearly unhelpful.

Here's the FBI encouraging people to monitor family members for signs of extremism so that they can "report them to the #FBI." https://t.co/mpC5nJ7N9y

The American Stasi is urging people to report their family members for thoughtcrime. https://t.co/WvzRmJeBAk