Author and sociologist Kyl Myers — who made headlines over the last few years for announcing the birth of her gender-neutral “theyby” — has announced that her child, Zoomer, is a boy.

Myers and her husband Brent Courtney did not announce the child’s gender when it was born, stating in 2018, “We don’t disclose Zoomer’s genitals to people who don’t need to know.”

What are the details?

Zoomer, who turned 5 in May, has reportedly decided that he is a boy and has asked his parents to use he/him pronouns.

According to the Salt Lake Tribune, Myers — who has also detailed her family’s “gender creative” parenting in a book, “Raising Them” — detailed the gender reveal in a May 25 Instagram post.

She wrote, “My family does regular pronoun checks with one another. As we’re putting shoes on to head out to run errands, Zoomer asks, ‘Hey mom. What pronouns do you want me to use for you today?’ Some days I say, ‘I’m very they/them this morning.’ Other days I say, ‘she/her feels good right now, thanks for asking.'”

Myers’ post continued, “We had a pronoun check back in March 2020, around Z’s 4th birthday, that was quite special. I asked, ‘What pronouns are you into for yourself these days, Zoomer?’ And Zoomer responded, ‘I love he/him!'”

Myers said that she commended the child for choosing pronouns that he loves and began sharing the news.

“Since then, we let family, friends, & Zoomer’s teachers know that Z uses he/him pronouns & everyone got on board & made the pronoun switch,” she continued. “We caught ourselves using they/them & quickly corrected to he/him. Z told me once, ‘It’s okay. I like they/them, too.’ I smiled at Zoomer’s grace, ‘But if you LOVE he/him then it’s really important to me to use the pronouns you love.’ Zoomer smiled back, ‘Yeah, I love he/him.'” 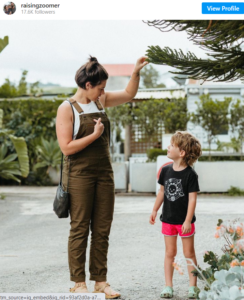 Myers added that her child has used the term “boy” to describe himself, but continue to prefer “kid” and “person” in addition to simply using his name.

In a September op-ed for Time, Myers pointed out that when she was pregnant with her child, both she and her husband were in agreement that they would allow their unborn child to choose its gender when the right time came.

“We weren’t going to assign a gender or disclose their reproductive anatomy to people who didn’t need to know, and we were going to use the gender-neutral personal pronouns they, them, and their,” Myers wrote. “We imagined it could be years before our child would tell us, in their own way, if they were a boy or a girl, nonbinary, or if another gender identity fit them best.”

“Until then,” she added, “we were committed to raising our child without the expectations or restrictions of the gender binary.”

“The aim isn’t to create a genderless world; it’s to contribute to a genderfull one,” she added. “We as a society have an opportunity to shake up childhood gender socialization in a way that creates more healthy and equitable adulthoods for everyone.”

Myers noted that she and her husband worked diligently to educate their child on sex and gender, prompting Zoomer to have a “more nuanced understanding” of such concepts even at the tender young ages of 2, 3, and 4 years old.

“We teach them to use gender-neutral words until a person tells us about themself,” Myers continued. “We call kids friends. We have taught Zoomer about their own body without using boy-girl labels. Zoomer understands that some girls have penises and some boys have vulvas, and some intersex kids have vulvas and testes. Zoomer knows some daddies get pregnant and some nonbinary parents are called Zazas.”

Myers concluded her essay, “I’m witnessing my child create their own gender — and who Zoomer has become is greater than anything I could have imagined or assigned. Instead of us telling the children who they should be, maybe it’s the children who will teach us how to be. We just have to get out of their way.”