German newspaper Berliner Zeitung has published a report seeking to answer why an “unusually large number of professional and amateur soccer players have collapsed recently.”

Headlined ‘Puzzling heart diseases in football,’ the report begins by highlighting the case of FC Barcelona’s Sergio Agüero, the 33-year-old striker who recently had to be withdrawn from a match after 41 minutes suffering from dizziness and breathing difficulties.

The article lists a large number of recent cases of footballers who have had heart problems or collapsed on the field, in some cases leading to death. 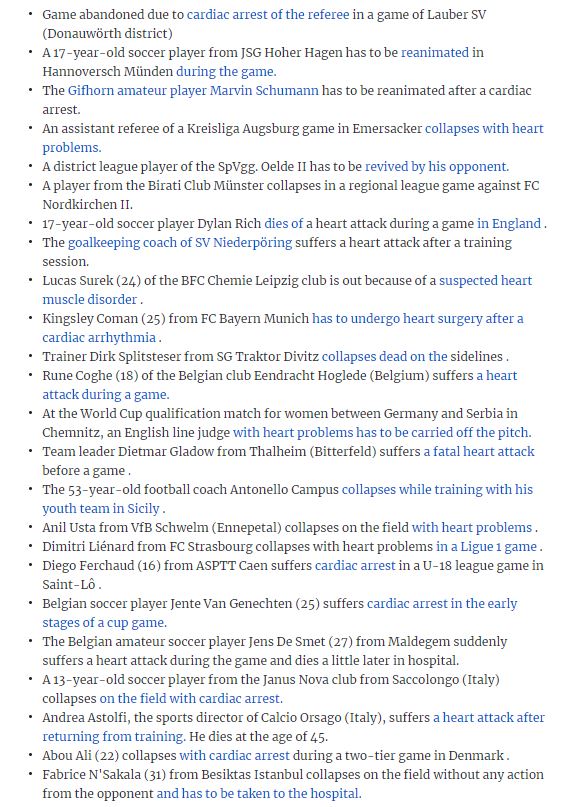 As we previously highlighted, other professional athletes have also recently suffered similar health problems, including 24-year-old Slovak hockey player Boris Sádecký, who tragically died after collapsing on the ice during a match last Friday.

The Berliner Zeitung article doesn’t speculate as to whether reactions from COVID vaccines had anything to do with the rash of collapses and heart problems.

However, it does note that “heart muscle inflammation (myocarditis)” can “already occur in the course of banal virus infections” and lead to “life-threatening cardiac arrhythmias.”

A “small number” of vaccinated people have suffered heart inflammation problems as a result of the vaccine, according to a Wall Street Journal report.

Researchers are now investigating reports that the Pfizer and Moderna vaccines “are likely causing the inflammatory heart conditions myocarditis and pericarditis.”