Global Affairs Canada is purging content from its websites and social media platforms in what officials say is a bid to protect Afghans at risk of reprisal from the Taliban.

But some of the content being removed or hidden also appears to include tweets that condemned the Taliban for “violent, destructive action” and others that promoted gender equality initiatives.

“This is in line with our international partners.”

She said there is a “large volume” of photos and videos now being reviewed and removed, but would not comment on why the content being removed appears to include posted statements and retweets of Canadian government initiatives to promote gender equality.

“The privacy and safety of Afghan nationals who worked with Canada is of utmost importance and we will continue to take all possible measures when necessary,” she wrote in an email.

“For security reasons, we cannot provide additional details about our operations.”

Global News first contacted Global Affairs Canada last week after becoming aware that the Twitter accounts of the Canadian embassy in Afghanistan — one in French, one in English — had been locked.

That move stood in contrast to the profiles of the embassies of allies involved in the effort to evacuate thousands of Afghans from Kabul amid the Taliban’s seizure of the country — including the U.K., France, Italy, Norway, the Netherlands, Germany, Australia, the European Union and the U.S.

Officials did not answer questions on why the accounts were restricted, where the direction to do so came from, and who was deciding which accounts should be permitted to see the embassy’s activities.

“Our ongoing work to bring Canadians and Afghans to safety in Canada under the Special Immigration Measures continues and remains a top priority,” said a spokesperson for the department last week.

“For security reasons, we cannot provide additional details about our operations.”

Within 48 hours, the embassy’s profile was switched again from restricted to public.

However, the vast majority of its tweets had been deleted or hidden. 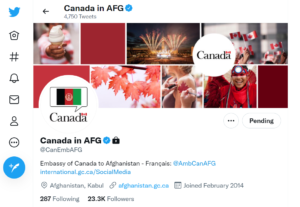 As of Wednesday, the embassy’s restricted profile view hid the content of its tweets but the number of tweets attributed to the account was visible: 4,750.

By Friday afternoon, only 74 remained and all but four were invisible on the newly open profile.

As of Monday morning, 77 tweets were attributed to the account and only seven were visible.

A government official speaking on background did not answer questions from Global News about why the tweets either hidden or deleted appear to include some that shared joint statements condemning Taliban attacks on infrastructure as well as some promoting gender equality.

“Given the large number of imagery that we have published on multiple platforms throughout our years in Afghanistan, the manual review and removal process will have taken time,” the official said.

“We are using the accounts to provide important information as early as possible, on the special immigration program and consular info.”

According to archived views of the embassy Twitter account stored on the Wayback Machine, the embassy’s accounts had been locked at some point after Feb. 8, 2021, though a lack of archival data about the profile’s URL means the exact date of restriction is not clear. 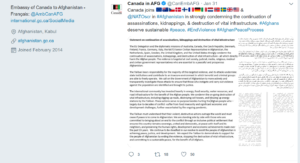 The extremist group seized control of Afghanistan in a lightning advance cumulating in the fall of Kabul on Monday, as the world watched in horror and U.S. President Joe Biden defended his withdrawal of troops from the country after 20 years of conflict.

American troops secured the Kabul airport this week, and a deal reached between Canada and the U.S. on Wednesday has allowed Canadian military aircraft to begin resuming evacuation flights, though with significantly fewer people on board than the American evacuation flights using the same aircraft.

Thousands of desperate people have crowded outside the security perimeter set up by American and allied forces that are holding the airfield, and access into and out of the area is severely limited by both the crowds and Taliban attacks on civilians.

The Taliban’s lightning seizure of the country has escalated fears that thousands of Afghans who supported allied forces in roles like interpreters during the two-decade conflict in the country will be targeted for reprisals by the extremist group.

Those concerns last week led American officials to confirm that multiple U.S. government agencies are purging content from their websites that could endanger Afghans who supported troops there.

The Associated Press reported on Aug. 17 that spokespeople from the State Department, the U.S. Agency for International Development (USAID) and the Agriculture Department had confirmed taking down articles, photos and other information over the past week as the Taliban swept into power.

State Department spokesman Ned Price said the department was advising personnel to search for and remove social media and website content featuring civilians because the safety of Afghan contacts “is of utmost importance” to the government.