The founder of the far-left Internet website Snopes allegedly embezzled and spent nearly $100,000 on prostitutes during his divorce from his first wife.

This is the same person who claims moral superiority over everyone on the Internet!

Snopes.com – the website that claims God-like status on the Internet – was founded by deviant David Mikkelson.

Snopes ignores the monstrous lies of the left. It is used to expand the Marxist agenda and desires and focuses its energy on smearing right-leaning websites.

Mikkelson and his first wife Barbara ran the site until their marriage ended in divorce according to the Seattle Times:

Mikkelson’s wife at the time, Barbara Mikkelson, worked on the site, too. It was more of a hobby that eventually started making a little money from ads — “enough to take a weekend trip” — and then became a real moneymaker.

The marriage ended in divorce, with Barbara selling her share in 2016 to a company called Proper Media. There has been ongoing, messy litigation that was covered in-depth in Wired magazine last year.

Here’s a picture of the now divorced David and Barbara and a cat: 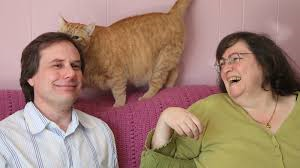 As divorces go, it appears that this was a rough one for the Mikkelsons  – well at least for Barbara  (see story here). During the divorce, Barbara Mikkelson’s court filing alleged that her former husband and founder of Snopes had embezzled $98K from the company and spent it on himself and the services of prostitutes.

Apparently Mr. Mikkelson, was attracted to a lady by the name of Elyssa Young, a former Libertarian candidate for congress in Hawaii.

Mikkelson later married the escort.   He was then later  suspended by Snopes in August for mass plagiarism.

And now the Snopes founder is accused by his second wife, the former escort, of raping her every morning.

Elyssa Young posted about the daily attacks on Facebook.

Elyssa Young posted this about the daily rapes on Facebook.
According to Nation and State.

My parents are completely self absorbed narcissistic pieces of work only concerned with their emotional blackmailing and thier narcissistic supply (My own mother who was once the director of peirce county rape relief, and now is “lay leader of the world for the methodist church doesn’t want to disrupt her happiness with my “rich husband” who quite honestly, raped me every morning. (By engaging with me ONLY while i was asleep and clothed for tearful years.

And yes i regularly sobbed to him to stop and his therapist what was going on. I went to multiple therapists and told them what was happening but they decide upon speaking with david mikkelson that i was”on drugs” and that I was the problem. Not the raping…

They accused her of being on drugs.
Wow! 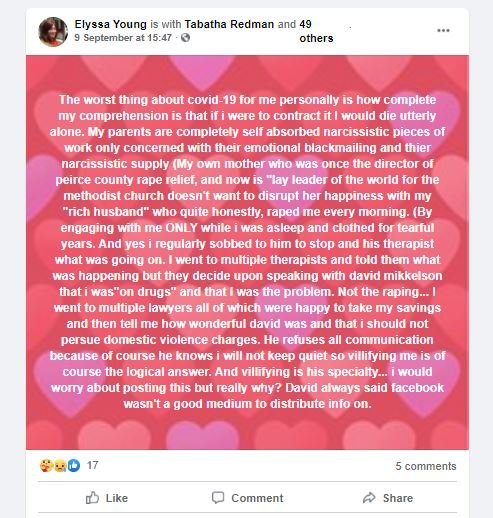