Hamas can’t win a military war against Israel, but every time they start one, the virus of antisemitism, for which there is no vaccine, and whose ever-more vicious strains spread farther and faster by the day.

In every major city of North America and Europe, last week’s anti-Israel rallies turned ugly in a way we in Canada have not seen before, with rock-throwing, Israel flag burning and outright assaults reported. Combat Antisemitism Movement’s weekly report states that antisemitic incidents in the UK have increased by 600 percent. A number of British Jews have been attacked in the streets, and a car caravan flying Palestinian flags drove through neighbourhods with a high density of Jewish residents, chanting, “F*ck Jews, rape their mothers, rape their daughters.”
Analyzing 77 media reports of antisemitic incidents, CAM found that 43 of them (56 percent) were motivated by Islamism; 14 incidents (18 percent) came from the far left; 6 were from the far right (8), and 14 (18 percent) were unidentifiable. Numbers like these leave no room for equivocation on the sources of contemporary Jew hatred. European Jews have been exposed for decades to pathological hatred from what is known as the “red-green” alliance of Marxists and Islamists. In Canada, where hate incidents of any kind rarely involve physical assaults, we have been slow to understand that it was just a matter of time before this particularly virulent infection reached our shores.

Ordinary Canadian Jews immediately absorbed the shock and ominous implications of the exponential rise in expressive antisemitism. Every Jew I know is feeling anxiety and fear. But Bernie Farber, chair of the Canadian Anti-hate Network (Antihate.ca), mocked our concerns. Last Tuesday, Farber took to Facebook to scold those “[s]preading sick rumours of violence aimed at Jews” as “fearmongering” and “the worst kind of nonsense.” He said advocacy groups for Jews, Palestinians and Muslims “should speak in one voice to condemn it.” “It,” to be clear, being Jewish fear-mongering. 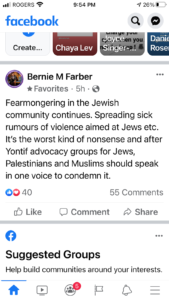 It is difficult to overstate the offensiveness of such blatant denial from someone in Farber’s position. Antihate.ca is in the business of combatting (unspecified) “hate groups.” Although the organization has no official standing in the Jewish community, Farber’s group is often consulted as though it were an official community entity by media and government people, assumed to be a reliable source for truth on the subject of antisemitism. Antihate.ca receives grants from the government, and has positioned itself as the go-to organization for school boards and other institutions willing to pay for presentations and materials on the hate situation in Canada.
The name is misleading. It is not “hate groups” in general that Antihate.ca concerns itself with. It is hate from one source only—the far right which, as the CAM numbers show, is virtually irrelevant to the escalating crisis of global antisemitism. Antihate.ca does not hide their bias. Farber has admitted to website commenters and on Twitter that “we research all aspects of white supremacy,” period, because “[w]hite supremacists pose the biggest threat in [North America].”
Although erroneous, this is an article of faith amongst many aging leftists, for whom the Holocaust is the defining Jewish event of their lives. For them, Nazis—the historical brownshirt, goosestepping kind, flaunting swastikas and speaking German, along with their pathetic brotherhood of modern stooges—became the once, forever and only icon of genocidal antisemitism. They are frozen in time. They can’t get their heads around the fact that neo-Nazis of that kind are low-hanging fruit for hate-bashing, because they have no credibility with any decent human being of any mainstream political persuasion. Nor do they hold any institutional power in any democracy.
These Nazi-trackers seem not to—or perhaps have chosen not to, as Farber’s post suggests—to grasp the reality  that the head office for genocidal hatred of Jews, whose rhetoric makes Hitler look ambivalent, has shifted from Berlin to Gaza, with branch offices all over the world, staffed by fellow Islamic supremacists and abetted by privileged white progressive BDS allies in academia. These useful idiots believe they are supporting a social-justice movement that is battling “colonialism” and “apartheid” and “racism,” but in fact, as has been amply documented and affirmed, including by those best placed to understand systemic antisemitism when they see it, BDS is a movement inspired by and suffused with Judeophobia.