Joy’s Week of Hate: Fox Is al-Qaeda, GOPers Are the New Taliban, and TX Loves Rapists

MSNBC’s The ReidOut host Joy Reid had a pretty interesting time, as after weeks of being Jalalabad Joy for the Biden administration, she moved to a new week in which she compared Fox News personalities to Osama bin Laden and his al-Qaeda network, falsely claimed the Afghan airlift was the largest in human history, and said a more apt term for conservative, evangelical Christianity is “Talibanism.”

And we’d be remiss if we didn’t talk about her guests as they espoused deranged views such as insisting a strong Christian faith wasn’t real and instead a cover for authoritarianism and racism, and raged about the need for President Biden to deputize as many doctors as possible with qualified immunity to flood Texas with doctors ready to murder babies at a moments notice.

But worst of all was a Reid rant on Friday’s show that accused over 70 million Americans of being “pro-death,” condones the events of January 6, doesn’t care what happens to babies once they’re born, likes rapists more than women, supporting climate change that will burn your house down or blow it away in a hurricane, and would like to have troops serve and die in “forever wars.”

Below is a Notable Quotables-like compilation of takes from Reid and her guests, presented in no particular order.

If You’re a Conservative, Evangelical Christian, You’re Just as Bad as the Taliban

“The things that the vast majority of people want: women to have liberty — personal body liberty but between Republicans who don’t respect the rules and the laws and willing to cheat and willing to do whatever it takes and now the courts being on their side and there now being a solid majority of them who want to enact hyper right-wing, basically evangel — you know, a certain evangelical rule over us which is 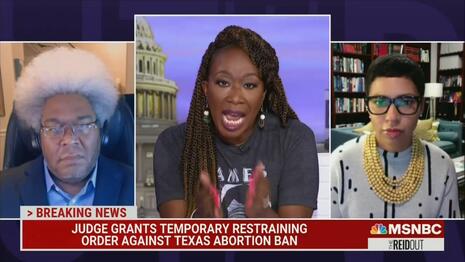 Talibanism, right? This is our sect and you will live by our sect whether you want to be a part of it or not. That scares me.”

“[The courts] are stacked now to essentially suborn our democracy to their very particular version of right-wing evangelical Christ — what they call Christianity and they’re going to force the rest of us to live under those rules. That’s no different than Talibanism. And we’re just watching it happen like it ain’t happening. It’s happening, guys. Wake up everybody. Democrats wake up.”

“[W]e have a situation in Texas right now tonight where the American Taliban, because that’s what it is — there’s not an American evangelical right-wing movement — there is an American Taliban — is weirdly similar in so many ways to the Middle Eastern Islamist terrorists.”

“[T]here is no evangelical political movement. There is a new American Taliban, and their goal is theocracy, which means to take our religious beliefs, which for them are Old Testament law, not Christianity, and force secular Americans, non-evangelical Americans, progressive Americans, women, people of color into that box and this is not hyperbole. This is happening right now tonight in Texas. This is happening right now with the people dying of COVID, children dying of COVID, because pro-lifers have seen fit to stand against Joe Biden’s vaccine as a way to own the libs.”

Fox News Is Like Osama bin Laden: They Want GOPers to Die While They Stay Alive

“That’s why I equate [conservative talk radio hosts] to lower level drug dealers who are getting high on their own supply because the people at Fox are in a database they have to put their name in that says they’re vaccinated. You cannot go near Tuck’ums if you’re not vaccinated. He doesn’t let you get near him because he’s not going to get sick and die. They’re at the — you know, Osama bin Laden level of telling people to blow themselves up, right? And so, but down the food chain, you do have people and, I know, listen, the supplement thing has been big in talk radio for a long time. A lot of those people are getting that stuff sent to them for free cause they’re pushing it.”

“These folks would like you to believe there is some sort of organic movement on behalf of the majority of Americans, but the facts tell a very different story. These Astroturf protests have been primed by right-wing think tanks, including the Proud Boys, and even people who don’t have kids in the school where they protest. And a new Ipsos/Axios poll shows that while these twisted ravings get tons of coverage, the loudest voices do not equal majorities.”

To Win, Dems Need to Tell Voters GOP Want to Burn Your House Down, Rape Your Kids

“You have to fight fear with fear. Policy isn’t always going to win the day. Facts and truths are not always going to win the day….So, when we talk about issues — whether it is climate change, “hey, right now your house can be on fire, your place could be flooded, your entire livelihood could be wrecked.” We need to scare people with that. When we talk about what’s going on right now with Texas, you know, and it’s like you just said: a rapist can impregnant you and that person has more rights than you do with your own body. That should be the ad that’s playing everywhere in this country right now. And here’s the thing: Republicans have to invent things. They have to lie about things to scare voters. We can just tell the truth about what’s happening. We can just tell the truth about what Republicans are doing. It’s not that hard. It’s not that complicated. Democrats need to get away from this novelty that they have that, somehow, the best policies and the best ideas are always going to win. It is not. That’s not the world we live in right now….It is going to take running a sustained brand campaign against the Democratic arsonists that are the Republican party to win these elections coming up.”

The Bible Is Fine with Abortion Because It Isn’t Really Murder!

“The religious right is a powerful voting bloc in this country, shaping elections, legislation and Supreme Court nominees, but what the religious rights says about its most famous rallying cry abortion, well, it often isn’t true that the Bible forbids abortion. That’s a lie. That abortion is murder, that legal abortions are dangerous. Nope, none of that is true.”

“Some 123,000 people have been evacuated from Afghanistan. The largest air lift, I believe, probably in world history, definitely in United States history. Some 6,000 Americans among them….Secretary Blinken thanking the United States military, singling out particularly the Marines who, of course, are a fixture as you walk into any federal building. The Marines being the front line of our fight there at the end, having lost 13 of their own tragically at the end of this war.”