In an unusually harsh judicial slapdown of the Trudeau government, a federal judge has ruled that an Ontario university was barred access to the Canada Summer Jobs Program for little reason other than the fact that it was a Christian institution.

In a decision on Tuesday, Justice Richard Mosley ruled that the federal government had breached “procedural fairness” in its treatment of Redeemer University, a private Christian liberal arts university in Hamilton, Ont. – and had denied the school funding based solely on its religious opposition to same-sex marriage. In a rare move, Mosley also ordered the federal government to pay Redeemer’s full legal costs, which amounted to $102,000.

“I have never seen that in any court, let alone the federal court,” Redeemer University’s lawyer, Albertos Polizogopoulos, told the National Post on Friday, calling the judge’s decision an obvious “punitive” measure.

Within two months, the application was rejected on the grounds that Redeemer could not demonstrate “that measures have been implemented to provide a workplace free of harassment and discrimination.”

At the time of the application, Redeemer University required its students to avoid “sexual intimacies which occur outside of a heterosexual marriage” – a policy that also informed the selection of faculty and staff. 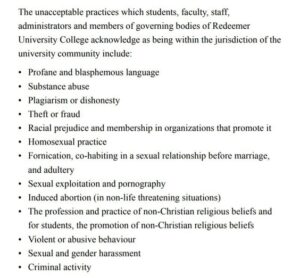 Nevertheless, those strictures didn’t extend to the school’s 11 Canada Summer Jobs Program positions, which ranged from summer camp attendants to workers at an onsite water treatment plant. In its application Redeemer had even expressly pledged to target “LGBTQ2 youth” for hiring.

Soon after its application, Service Canada asked Redeemer to provide “missing information” as to how the school intended to maintain a non-discriminatory work environment.

In reply, Redeemer forwarded its 35-page Anti-Discrimination Policy which cited the school’s adherence to the Ontario Human Rights Code and cited Redeemer’s campus policy of the right to be “free from the threat of harassment and discrimination.”

Service Canada then rejected the school’s application, citing Redeemer’s “sexual intimacies” policy, as well as academic handbooks published by the school which listed “homosexual practice” as one of the school’s “unacceptable practices” for students and faculty.

Tuesday’s Federal Court decision effectively concluded that Redeemer University hadn’t been rejected out of any red flags in its application, but because of a “cursory search of the Internet” to which Redeemer hadn’t been given the chance to respond.

“If the concern of (Service Canada) was that Redeemer discriminated based on sexual orientation, there was no contemporaneous evidence of that in the file,” wrote the Federal Court decision.

Justice Mosley added “there is no evidence … that (Service Canada) made any overt attempt to consider Redeemer’s rights to freedom of religion, freedom of expression or freedom of association in considering its application.”

Or, as Redeemer University lawyer Albertos Polizogopoulos summed up the government’s stance, “we don’t like your position on sexual morality and that’s why you’re denied.” In Polizogopoulos’ submissions to the court, he alleged that Redeemer had been subjected to a “background check” beyond the usual scope of the Canada Summer Jobs Program application proceed.

In a statement to the National Post, Redeemer University said it pursued its court action against the federal government because the school felt it “was being rejected only because Redeemer held legal views on traditional marriage.”

Interim president David Zietsma referenced a section of the Civil Marriage Act – the 2005 law which legalized same-sex marriage in Canada – which states that “no person or organization shall be deprived of any benefit” if they held official beliefs viewing marriage “as the union of a man and woman to the exclusion of all others.”

Said Zietsma, “we were concerned about the precedent this kind of discrimination would set for religious institutions.” The lawsuit intentionally did not seek payment of the $104,187 grant, but was pursued instead because of the “principles involved.”

In 2018, the Canada Summer Jobs Program was subject to a wave of lawsuits after employment minister Patty Hajdu made funding conditional on organizations’ pledging their support for abortion.

The federal government ultimately backed off the abortion pledge, and by the time Redeemer University made its 2019 application, Service Canada was instead mandating a much more general policy of a “safe, inclusive, and healthy work environment free of harassment and discrimination.”

Redeemer University applied again for the Canada Summer Jobs Program in both 2020 and 2021. Polizogopoulos said that Service Canada delayed the school’s 2020 application until the program was out of money, but then approved its 2021 application without incident. As a result, this summer Redeemer University hired its first Canada Summer Jobs Program workers since 2017.

Said Polizogopoulos, “I don’t know what changed other than we held the government’s feet to the fire.”