‘Looks like a gun of some sort’: 911 calls over Alberta Stormtrooper incident released

LETHBRIDGE — An internal investigation into the Lethbridge Police Service’s response to a firearms incident on May 4, 2020 is now complete and the officers involved will not be disciplined.

That’s the determination made by LPS Police Chief Shahin Mehdizadeh in connection with the incident where a group of police officers forcibly arrested the employee of a local café that was celebrating Star Wars Day.

According to a report, conducted by the Medicine Hat Police Service, police received two separate emergency calls about a stormtrooper, a fictional character from the science fiction series, walking around with what appeared to be a gun.

Audio released from the 911 dispatches suggested that the callers weren’t sure if the gun was real.

“Well, on 13th Street N., I was just driving and there was somebody dressed in a Star Wars costume and they’re carrying a weapon,” one caller said. “It looks like a gun of some sort.” 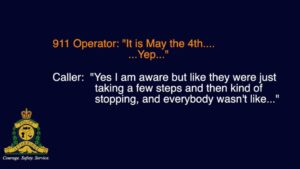 In the other call, it’s mentioned that it was May the Fourth, a day recognized as the unofficial Star Wars day because of its similarity to the iconic phrase “may the Force be with you.”

Nevertheless, officers still responded to the scene and found the stormtrooper that was causing the commotion.

They told the stormtrooper to get on their knees and drop their weapon, which they immediately did, the report indicates.

The officers then believed the person to be unresponsive and moved in to make the arrest.

“One of the officers approached the person from behind, grasped the upper back plate of the costume and forced them to the ground in a controlled movement,” police said in a release on Wednesday. “The other two officers moved in to assist with the arrest and the person was handcuffed and the mask removed.”

Police soon discovered that the stormtrooper was a woman promoting the nearby Coco Vanilla Galactic Cantina, a Star Wars-themed restaurant, and not a member of the Empire’s fearsome legions.

They also determined the gun was a fake and a part of the woman’s costume.

The whole event lasted less than three minutes, and left the woman with a bloody nose.

Chief Mehdizadeh says the encounter was difficult for the officers, especially when they are trying to “process everything very quickly.”

“There is no doubt that this incident was extremely stressful for the woman involved as she likely did not understand what was happening and was not able to see or communicate well through her helmet,” he said in a release.

“Firearms calls like this are also very stressful for officers.”

The report stated that when the officers arrived on scene there were no signs or music to signal to the officers that there was no threat.

Coco Vanilla’s owner, Brad Whalen, says that was not the case.

“We are appalled about this statement of findings and the lies within, claiming we did not have Star Wars music nor that any of the signs in the parking lot had Star Wars signs as clearly shown in the video evidence.”

However, Mehdizadeh says that his officers were at the parking lot lawfully and acted the way they were supposed to.

“The officers were lawfully placed in response to a 911 call and they handled the threat to which they were dispatched in a measured and prudent way.”

Mehdizadeh’s disposition of the investigation has been given to the provincial director of law enforcement.

Back in December, the Alberta Serious Incident Response Team released the findings of its own investigation into the Stormtrooper incident.

It, too, found no wrongdoing on the part of the Lethbridge Police Service.