DALLAS (CBSDFW.COM) — High praise for a K-9 officer at Dallas Love Field Airport after more than $100,000 was found in a passenger’s luggage.

On December 2 the canine — named ‘Ballentine’ — alerted on an individual checked suitcase. It turns out the bag, that belonged to 25-year-old woman from Chicago who was on a layover at the airport, contained blankets and two large bubble envelopes filled with $106,829 in cash. 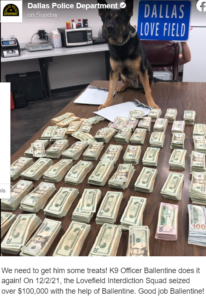 The woman who owned the bag was not arrested, but the money was seized and police say it will be subject to the civil asset forfeiture process.