New Yorkers this week will have to start carrying their COVID-19 vaccine card or a digital copy to get into restaurants, bars, nightclubs and outdoor music festivals.

The new requirement, now set to begin Tuesday, is the most aggressive step the city has taken yet to curb a surge in cases caused by the delta variant. As the first major U.S. city to require anyone partaking in certain indoor activities or large outdoor gatherings to prove they’ve been inoculated, all eyes are on the five boroughs. People will have to show proof that they have had at least one vaccine dose and business owners are burdened with enforcing the rules.

“It’s gonna be really hard to police people coming in with the cards and making sure everyone has their cards on top of all the other stuff we have to deal with,” Sandra Jaquez, the owner of Il Sole in Upper Manhattan, told NBC New York.

Her worries are shared among business owners across the city and their concerns are not unfounded because Mayor Bill de Blasio had not given restaurants like Jaquez’s any guidance on how to enforce the rules, or what to do if someone resists. On Monday morning, one day before the start of the “Key to NYC” vaccine program, de Blasio revealed some framework for businesses and a website detailing enforcement. 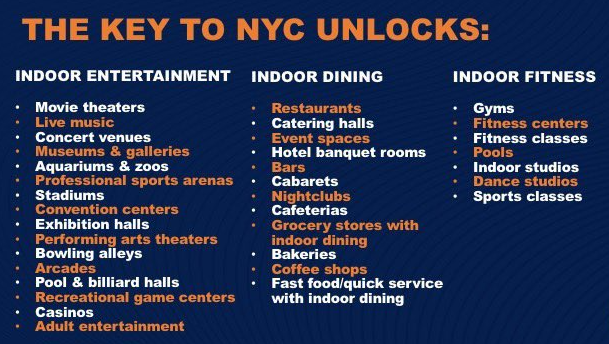 The simplest way to prove you’ve gotten the shot is simply to show your vaccination card — the same piece of paper you get from health providers and the Centers for Disease Control and Prevention. Taking a picture of that card at home and then showing the image to the bouncer at the club can also work.

New York City offers a streamlined way of showing a photo through its NYC COVID Safe App, in which people can store images of their vaccine cards and then display them in the app when needed. You can also use the state’s Excelsior Pass app.

While inspections and enforcement for businesses won’t begin until Sept. 13 — the week the city’s public schools reopen for fall — a rally against the mandate held on Sunday outside Gracie Mansion suggests there will be resistance from patrons and business owners alike.

Opponents at the rally include GOP mayoral candidate Curtis Sliwa, who is vaccinated and has encouraged others to get the shot if they want. He said the vaccine mandate infringes on people’s personal freedom but de Blasio says the mandate is about curbing the spread of the delta variant, which now accounts for 90% of tested cases in the city.

“The goal here is to convince everyone that this is the time. If we’re going to stop the delta variant, the time is now,” the mayor explained.

Data shows that about 67.5% of adults in New York City are fully vaccinated and 72.4% have had at least one dose.

IN MARCH, the FBI had issued a joint statement with the Department of Health and Human Services urging people not to buy, create, or sell fabricated vaccine cards. The unauthorized use of the seal of an official government agency is a federal crime that carries a possible fine and up to five years in prison.

Schumer said the price of paying for the fake vaccine card and getting caught with it is much higher than just getting the vaccine which can prevent hospitalization and death from COVID-19.

In Newark, New Jersey, all city workers have to be vaccinated against COVID-19 starting Monday. They have 30 days to get the shot or risk termination, unlike in NYC where city workers have the option to get weekly testing if they’re unvaccinated. Other local governments and private businesses across the country have started demanding the same of their workers as the variant continues to spread rapidly.

All of New York City is now a “high transmission” area, per the CDC — and the transmission rate (total new cases per 100,000 people over the prior seven days) is up almost 16% in just the last week alone, according to the city health department’s latest update Friday. The same holds true for all of New Jersey counties and much of Connecticut.

Virtually every important infection metric in the city is getting worse too, with the daily average of reported cases seeing a 59% increase from the average two weeks ago, according to New York Times data. COVID patients in intensive care have also tripled in the last month and now stand at 289, more than 3.5 times what they were this time in July.

NYC is among 90% of the country that meets the CDC’s guidelines recommending people wear masks indoors, whether they are vaccinated or not, but there will be no mask mandate from the city. De Blasio has said he “strongly recommends” people mask up inside.

Meanwhile, the city will celebrate how far it has come since it was once the epicenter of the pandemic in the U.S. with a concert series.

“We Love NYC: The Homecoming Concert” will take place Aug. 21 with a blockbuster musical lineup but each borough will get its own concert starting Monday.