What the heck. They gave Cuomo an Emmy, so it would be more surprising if Whitmer didn’t get some award.

Michigan's @GovWhitmer is one of seven people who will be honored by the John F. Kennedy Library Foundation for risking their own health and safety to protect others during the pandemic. https://t.co/eIlrASffV0

Despite violent threats against her life, Whitmer did not back down. She stayed focused on following the science.

Oh, hey, what do you know? My gag reflex does still work.

Of the seven receiving awards, Whitmer is the only craven power-mad politician.

In a manner of speaking, the Kennedy foundation showed great restraint when you think about it, given all the craven power-mad politicians they could have included.

When Michigan’s first cases of COVID-19 were identified in early March 2020, Governor Gretchen Whitmer invoked emergency powers in a bid to contain the spread of the virus and save lives,…

In a sharp rebuke, the Michigan Supreme Court concluded that “the executive orders issued by the Governor in response to the COVID-19 pandemic now lack any basis under Michigan law.”

That’s curious. They are also giving a “Profile in Courage” award to Mitt Romney for voting to impeach Donald Trump.

During a time of grave threat to U.S. democratic institutions, Mitt Romney has been a consistent but often solitary Republican voice in defense of democracy and the rule of law. In February 2020, after weighing evidence that then-President Donald Trump withheld Congressionally authorized military aid for political gain, Romney voted to convict Trump for abuse of power.

If I were a cynic, I’d say the Kennedy Foundation’s moralizing is reserved only for their political opponents.

Good thing I’m not a cynic!

While her leadership earned praise from many, she also faced sustained, vocal backlash over stay-at-home rules that remained in place as COVID-19 cases in Michigan continued to rise during the spring.

Because the stay-at-home orders made things worse and were almost certainly why cases continued to rise.

Well, while I won’t say she’s in good company, she’s definitely in the right company. 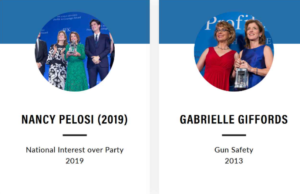 c. NOT THE BEE