The city of Denver was shocked last may when an 80-year-old man named George Black was beaten to death in broad daylight while feeding pigeons outside the Colorado State Capitol. According to witnesses, 36-year-old Stephanie Martinez assaulted black in an apparently-unprovoked attack, punching him until he fell to the ground and struck his head, and then following to the ground while continuing to punch him until witnesses finally intervened. Martinez was arrested and ultimately charged with first degree murder after Black died of his injuries that afternoon. Martinez is currently awaiting trial on the charge.

Now the family and Denver community are outraged after a KCNC-TV investigation discovered that Martinez was a “felon with a history of violence going back more than a decade,” and that she had been arrested twice for assault in the months preceding her alleged murder of Black. Black’s nephew, John Stewardson, told KCNC, “This person has problems. This person should not be on the street… Letting people revolve through the door when a crime is done helps absolutely no one and ends up hurting people just like it hurt my uncle.”

According to KCNC’s investigation, Martinez was charged with assault just two months before Black’s murder and released on probation, then was arrested and charged again on an assault charged, and released on personal recognizance.

KCNC’s investigation further found that in 2021 alone, more than 4,000 defendants in felony cases have been released on bonds of less than $5. KCNC found at least two other individuals who were arrested for violent crimes, released on nominal or no bond, and then subsequently were accused of committing murder, including Tonell Love, who is accused of stabbing a man to death six months after being released released on personal recognizance for an assault charge, and Joseph Topping, who is accused of firing a gun into a crowd and killing a person two months after being released on $1 bond for an illegal weapons charge.

Denver police representatives including police chief Paul Pazen, expressed outrage to KCNC over the findings of their investigation. “We’re not talking about low-level property crimes by any means. These are serious, violent felons and we need some level of accountability in these cases.”

State Senator Rob Woodward (R) has promised to draft legislation to curb judge’s authority to release people accused of violent crimes on little or no bond. “If someone won’t step in on the judicial side, that’s where the legislative side needs to step in and put some bounds on this for the safety of the citizens.”

Woman Out On Bond Arrested In Murder Of 80-Year-Old Man, CBS4 Investigation Finds Thousands Of Similar Cases In Denver 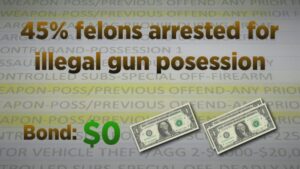