A premier of Alberta hasn’t been this disliked since the days of Alison Redford.

A ThinkHQ poll released Monday shows Premier Jason Kenney has the support of only 22% of people in the province.

The poll shows if an election was held today, NDP leader Rachel Notley would likely sweep back into power.

The poll shows Notley is not only ahead of Kenney in Edmonton, but also in the normally conservative strong house of Calgary. 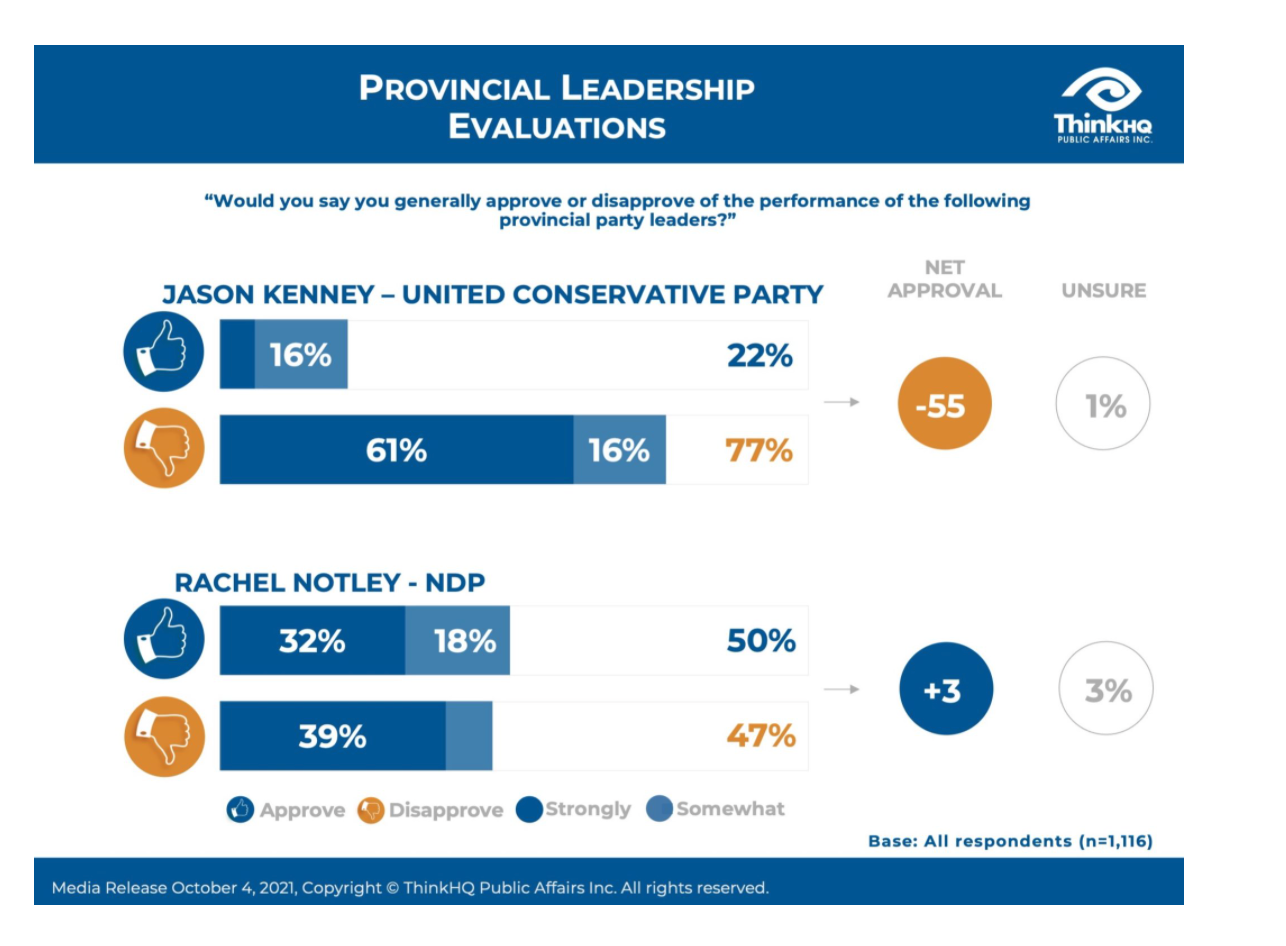 “This represents a serious decline in support for the Alberta premier, down 16 percentage points in the past two months, after a modest uptick in approval in July. If history is a guide, Kenney’s approval today is in dangerous territory. The last premier to sink to these depths in public support was Alison Redford who recorded an approval rating of only 18% in March of 2014 shortly before resigning,” said pollsters.

“Kenney has never been an overwhelmingly popular premier. During the “honeymoon” period of his new government in the second half of 2019, the UCP leader’s support reached its highest level (56%), but he and his government have been dogged by (among other things) their careening response to the COVID-19 pandemic.

“His slide in approval began shortly after the start of the pandemic, dropping from 52% to 31% over the course of the first year of COVID. In July, Kenney’s approval jumped up 7 percentage points driven by removal of COVID restrictions coupled with declining/stable case counts, but by the end of July COVID cases began spiking ushering in a massive 4th wave in Alberta.”

Notley has seen public appraisals of her performance notch up slightly since July, currently sitting at 50% approval (32% strong) vs. 47% disapproval (39% strong).

“Jason Kenney is a leader on life-support, and his prognosis is not good. We have not seen a sitting premier with numbers this low in almost a decade; Alison Redford resigned the day it was revealed her approval at the time had dropped to 18%. That’s a ‘margin of error’ difference from Kenney’s results today,” said ThinkHQ President Marc Henry.

“There is no doubt that COVID-19 is the origin of much of Kenney’s troubles, but in many respects, he has been the architect of his own misfortune. The province’s response to COVID has been unresponsive, at times contrary and disjointed, and the political gamble that was ‘The Best Summer Ever’ is now taking a punishing toll both politically for the leader and in real human costs for Albertans and the health care system.