Reuters: Half of Paris Cafes And Bars Refusing to Comply With Vaccine Passport Scheme

Though you wouldn’t know it from watching the media’s highlight reels of compliant sheep going along with France’s vaccine passport rollout, half of Paris cafes and bars are reportedly refusing to comply with the control scheme despite the government’s terroristic threats.

Dystopian nightmare that people claimed would never happen. Papers please in order to eat food at an outdoor restaurant with police roaming aroundpic.twitter.com/NGkSYMpoky

From Reuters, “Coffee and croissant in a French cafe? You’ll need a COVID pass for that”:

PARIS, Aug 9 (Reuters) – The French morning ritual of a coffee and croissant became more complicated on Monday as people had to show proof of vaccination or a negative COVID-19 test before taking a seat at their favourite cafe, though numerous eateries ignored the new rules.

A health pass now has to be shown to eat in a restaurant, drink in a bar, access non-emergency treatment in a hospital or travel on an intercity train, part of a government drive to contain a fourth wave of infections.

[…] Cafe and bar owners caught flouting the rule face a warning followed by a 7-day closure order on the second infraction. Two further contraventions could lead to a year’s jail time.

Even so, of the 10 restaurant and cafe owners Reuters spoke to in Paris on Monday, half said they refused to run the health pass checks. Police would take a lenient view initially, the Interior Ministry said.

There is no public support for this control scheme. 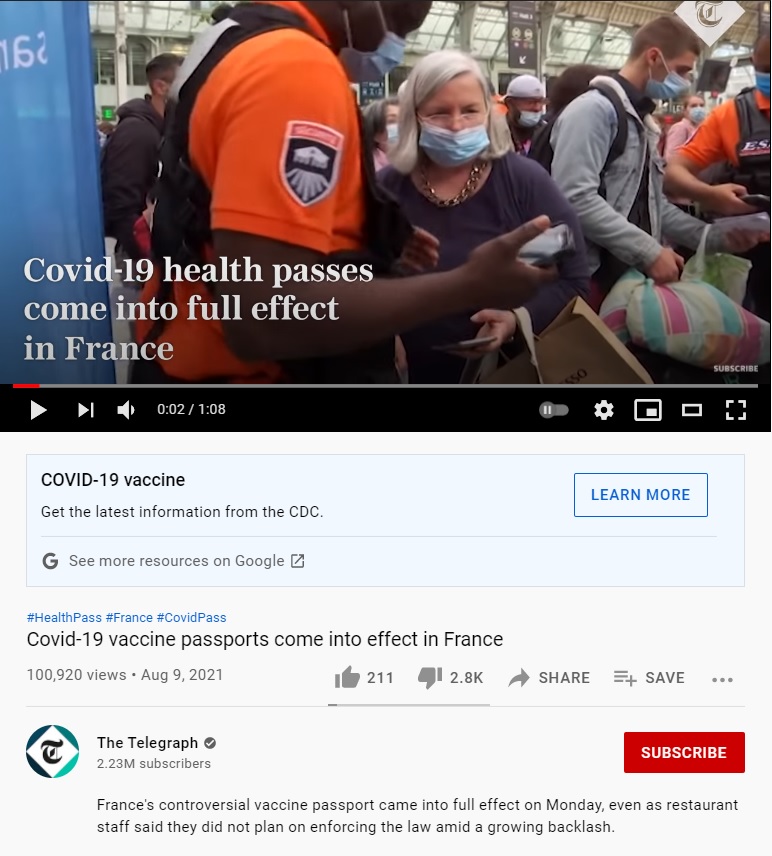 If they can’t even get over half of bars in Paris to go along with this scam, the compliance throughout the rest of France is undoubtedly even lower.