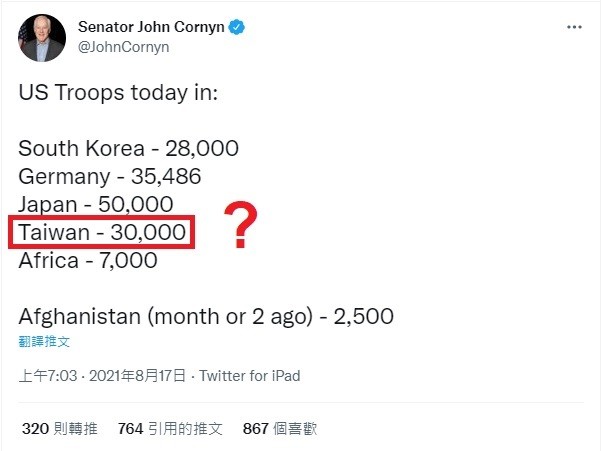 TAIPEI (Taiwan News) — Senator John Cornyn (R-TX) on Tuesday (Aug. 17) mistakenly listed the U.S. as having 30,000 troops stationed in Taiwan, a country that has not seen an American military presence in over 40 years, leading to widespread criticism on Twitter.

In the wake of the disastrous collapse of the Afghan government following the rushed withdrawal of U.S. troops from the country, many politicians are arguing that the relatively small force that the U.S. had in place maintained stability in the nation at a comparatively low cost in terms of lives and money.

To illustrate this point, Cornyn took to Twitter on Tuesday to list other current U.S. troop deployments around the world that are much higher than the 2,500 stationed in Afghanistan as recently as two months ago.

Among the countries listed with major troop contingents were South Korea, Germany, Japan, and Taiwan, where he cited 30,000 soldiers in place. However, the U.S. has not stationed troops in Taiwan since 1979, when former President Carter severed diplomatic relations with the country.

Many Twitter users were aghast that a member of the U.S. Senate Select Committee on Intelligence could get such basic information wrong. Others joked that Cornyn had accidentally leaked top-secret information about U.S. forces clandestinely stationed in Taiwan.

The last time the U.S. had 30,000 soldiers based in Taiwan was in the midst of the Vietnam War in the late 60s and early 70s. Many speculated that Cornyn may have obtained the number from a Wikipedia page on the defunct United States Taiwan Defense Command, which operated in Taiwan from Dec. 1954 to April 1979 and had 30,000 combined U.S. military personnel at its peak.

US Troops today in: