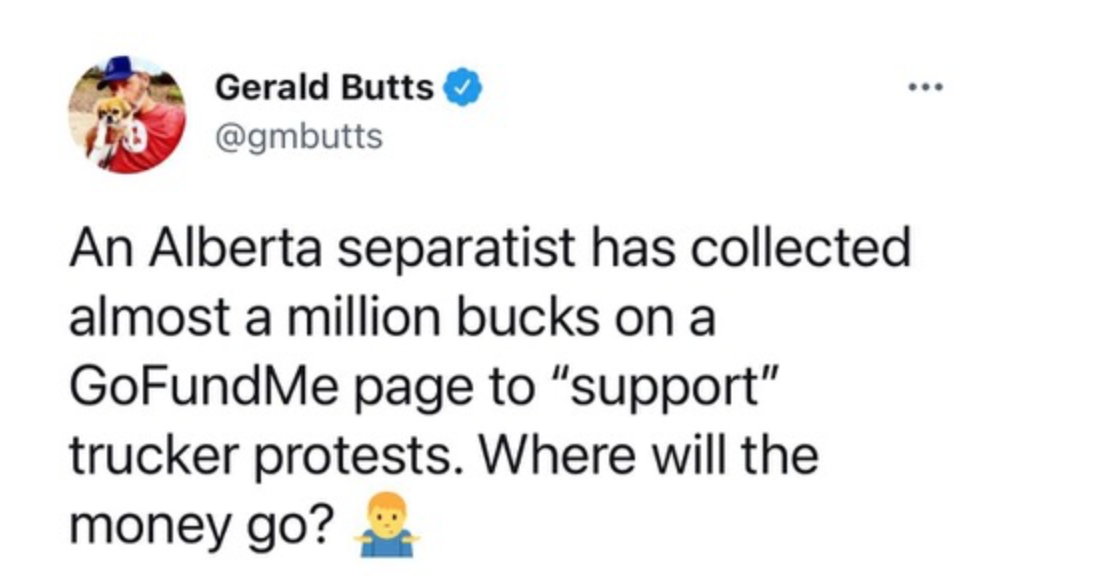 A fool pokes a stick into a hornet’s nest.

A bigger fool pokes at a massive convoy of truckers — hailed coast to coast as Canadian heroes — by levelling cheap shots and promoting unfounded accusations against the organizer of a fund supporting their Ottawa-bound protest of mandatory COVID-19 vaccines.

Gerald Butts, the acidic best buddy and former principal secretary of Prime Minister Justin Trudeau, took a run at Tamara Lich in an attempt to cast doubt on the integrity of Convoy For Freedom 2022.

“An Alberta separatist has collected almost a million bucks on a GoFundMe page to ‘support’ trucker protests. Where will the money go?” asked Butts in a tweet.

Almost $2 million has been raised to date.

Convoys are starting to roll cross-country to protest Liberal government vaccine mandates, including one imposed on January 15 that threatens both the livelihoods of truckers and the supply chain.

Butts cited a nasty January 21 piece, The murky matter of protests and the donations that drive them on trucknews.com., by blogger James Menzies.

In doing so, did Butts label truckers as terrorists? Well, they took it personally. Social media lit on fire.

“You need to listen. You need to rise up. It turns out that Mr. Fancy Sox’ little best friend Gerald Butts put out a tweet calling us a bunch of terrorists. Now we’re terrorists… They’re trying to slander what we’re doing,” said The Real Pat King in a Facebook video.

In his blog, Menzies lamented a “disturbing trend” in reference to the amount of money being raised.

He wrote what amounts to a hit job on Medicine Hat’s Lich, by listing her “association with radical groups” — the Maverick Party in Alberta and Wexit Alberta. Really.

“She was also affiliated with the Yellow Vest movement, which was linked to death threats against our prime minister. Is that what we’ve become, Canada? To her credit, Lich attempted to distance her local chapter from those making the death threats … she was affiliated with an organization that threatened to kill our prime minister – and now has nearly $1 million of your money to distribute as she sees fit.”

He then crossed another serious line that a lawyer might want to peek at on Lich’s behalf.

“And where will that million or so bucks go? It will go into the organizer’s bank account, that we know… From there, who knows? Since the fundraiser is not an official charity or organization, there is no further accountability.

“The good news is funds will be dispersed via e-transfer “(preferred.)” Paper trail! Since GoFundMe wipes its hands of accountability once the dough is deposited into Lich’s account, we hope she will be forthcoming about how those funds are distributed.”

What evidence did he offer to indicate Lich wouldn’t be forthcoming? None.

Yet Butts endorsed this drivel, this character attack, this baseless accusation.

By doing so, Butts was likely attempting to pit East against West, like the Liberals love to do.

The problem is East and West, but for a few latte-swilling lefties, are united in support of the truckers.

One convoy leaves B.C. Sunday with truckers from other provinces joining in, including many from Manitoba who protested at the Canada-U.S. border Wednesday.

Two more convoys will set out January 27, one from Enfield, NS, another from Windsor, Ont.

They will unite in Ottawa January 29.

Butts is likely less concerned about where the money will go than where it’s coming from — so many detestable (to him) Canadians rallying behind truckers standing up to the tyranny of the federal government.

Funds will help truckers pay for fuel, food, and lodging.

Unconfirmed reports claim any money left over will go to military veterans Trudeau abandoned, just like he abandoned our truckers.

The vaccine mandate could result in a loss of up to 26,000 cross-border commercial drivers, says the Canadian Trucking Alliance.

Canadian truckers must now show proof of vaccination to avoid taking COVID-19 tests before reaching the border. They must also quarantine upon arrival from the U.S.

Menzies decided beforehand the convoy of trucks on the road will be “angering the motoring public.”

Maybe some. They’ll be a lot angrier when their fridges are empty because the Trudeau gang kept truckers from stocking grocery stores.

The likes of Butts will surely be gnashing their teeth when they see the anticipated huge welcoming committees greeting truckers rolling into towns and cities with cheers and bagged lunches gratefully prepared with love.

Our truckers have earned the kind of trust and admiration petty politicians will never, ever get.

Someone should tell Butts — who billed taxpayers $127,000 for a move — that not everybody squanders other people’s money.

Truckers have given hope and courage to Canadians crushed by pointless mandates, lost freedoms, and lost jobs.