SLOBODIAN: Irwin has no one to blame but herself

NDP MLA Janis Irwin is not a victim; of homophobia or any other martyr label she chooses to throw around.

She’s a well-paid elected official representing Edmonton-Highlands-Norwood who behaved in a juvenile, offensive manner that’s unacceptable and unbecoming of someone who holds public office.

She wasn’t, as she claimed, “targeted by a far-right news outlet.”

If any other politician or public figure did what she did, they’d be subject to exactly the same scrutiny she received in this column Monday.

Being female and gay doesn’t excuse one from being held accountable for mocking and offending the Christian community — precisely what Irwin did – some of whom she was elected to represent.

Too often, when people fail to do their jobs properly they deflect warranted criticism by accusing others of persecuting them because they are female, or gay, or a certain skin colour, or suffer white privilege, or ate Cheerios for breakfast, or whatever excuse they can conjure up.

They camouflage this tactic by presenting themselves as caring champions for for the downtrodden. And maybe they are – that still doesn’t excuse poor conduct.

Few – if any – care about Irwin’s sexual preferences or identity. They are her business, and her’s alone. It is Irwin herself who never misses a chance to speak about herself to the exclusion of most other issues that are of public concern.

Irwin claimed she was targeted by Western Standard for innocently “popping by” Pride Corner, located on Whyte Avenue and Calgary Trail in Edmonton, last Friday.

She mocked Jesus and the Bible, used bully and intimidation tactics, and encouraged vigilantism against a street preacher holding a sign saying: ‘Believe on the Lord Jesus Christ and you will be saved.”

I don’t recall Irwin or her far-left ilk similarly disrespecting the religious beliefs of minority religious faiths with similar worldview.

One woman held signs saying: ‘Respect my existence or expect my resistance’ and another ‘Keeping YEG hate free.’ 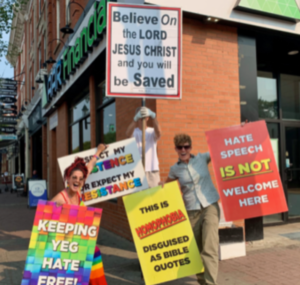 Proof that Irwin didn’t just pop by lies in the photo she posted of her grinning broadly standing there holding two signs saying: ‘This is homophobia disguised as Bible quotes’ and ‘Hate speech is not welcome here.”

Irwin later encouraged people to “Stop by! They’re there every Friday night til late, drowning out the hate.”

When this was accurately reported in this column, predictably, accusations of homophobia manifested.

Twitter activist Kathleen Smith took exception to Irwin being called out for “mocking supporters of God’ and wondered: “What did Janis do to be accused of such a thing?”

Oh please. This is what displeasure at Jesus being mocked looks like and concern about a politician behaving badly looks like. Don’t make stuff up.

Now, how did Irwin – Alberta’s Official Opposition and critic for LGBTQ2S+ issues – respond?

Did she assure Christians in her constituency that she’d represent – or at least respect – them?

Did she apologize for disrespecting their religion, while giving a pass to other faiths?