Sources: British And US Troops At Odds In Afghanistan As UK Engages Rescue Missions

Reports have surfaced that British and American forces are unhappy with each other at Kabul airport, as UK Military commanders are overseeing rescue missions into the city itself, while US commanders are sitting tight, leaving US nationals to fend for themselves.

Thousands of Americans trapped in the city were again advised by the US embassy that it cannot protect them if they attempt to get to the airport, and even if they make it, they might not be able to get on a plane out of there:

The British government, however has sent in 900 elite para troopers to rescue some 4000 nationals in Kabul, and told the soldiers to expect face to face combat with the Taliban.

Sources have indicated that the U.S. command is unhappy with the British forces going into the heart of Kabul, claiming that it is putting the withdrawal agreement at risk (isn’t a bit late for that?).

The British troops are also said to be livid at the way America is treating Afghans who are desperate to flee the Taliban.

Yet American troops are also said to be pissed off with their higher ups not letting them run rescue missions alongside the Brits.

Former Congressional staffer turned reporter Matthew Russell detailed what is unfolding according to sources in Kabul: 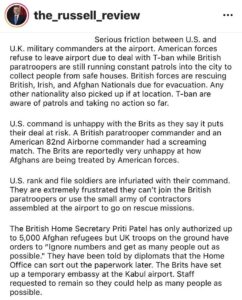