Starting today, you can drink in these Edmonton parks

The pilot program, approved earlier in May, allows alcohol consumption at 47 sites in seven public parks between 11 a.m. and 9 p.m.

Although Ward 3 Coun. Jon Dziadyk led the latest effort, he told CTV News Edmonton “this is something people have been asking for for a while to complement the picnic culinary experience.”

“Drinking in parks is not uncommon right now, but that’s breaking the rules.”

He said the program will channel the previously illegal activity to locations that are equipped with public washrooms and waste facilities, and which will be monitored by peace officers for enforcement.

A sign reading “Alcohol permitted at this picnic sites,” outlining the major rules, is posted at each location.

Some sites must be booked in advance online, while others operate as first come, first served. 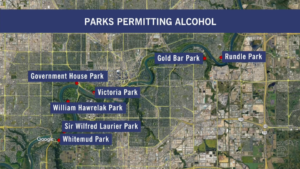 ‘THIS IS NOT A BEER GARDEN’: DZIADYK

“I don’t think it’s a problem as long as they’re not overdoing it,” one park user told CTV News Edmonton.

Another said, “I guess it depends on the people… I think it’s a great idea for people who are just out having a picnic with family and friends.”

Dziadyk said, “I have faith in Edmontonians that we can responsibly handle a beer or a glass of wine while eating a sandwich.”

“Public drunkenness is never acceptable. This should be no different than having a beverage in a restaurant and then leaving the restaurant. … This is not a beer garden. This is a picnic site.”

The pilot will run until Oct. 11 with peace officers enforcing the rules.

The city is collecting feedback on the pilot and will report back to council at the end of the year.

The survey, full rules, and booking site are available online.

Only bookings by groups of five or fewer are being accepted as per provincial gathering limits.

Previously, alcohol consumption was not permitted in any park without a festival and event licence.

Drinking at a non-designated site can result in a warning or a ticket.