Authored by Mike Shedlock via MishTalk.com,

After Switzerland dropped its negotiations with the EU, the country has now rejected a climate-protection law in a referendum. Concretely, they rejected all three parts of the law in separate votes: on CO2, on pesticides, and on drinking water.

We agree with the Swiss journalist Mathieu von Rohr that this failure is not merely important in its own right, but symptomatic for the difficulties facing Green politics in general. It is one thing for people to pretend they support the Green party, especially when it is cool to do so. It is quite another to make actual sacrifices as the Swiss were asked to do.

But what is particularly interesting about this referendum is that the strongest opposition came from young people. 60-70% of the 18-34 year old voted No in the three categories.

Each country is different, but the big yet unanswered question is whether people elsewhere would agree to make personal sacrifices for the greater good. The Swiss referendum tells us we should not take this for granted. The German elections will be the next big test.

The referendum Failed 51-49. And it took a crushing rejection by Zoomers and millennials to do it.

The BBC comments on the Huge Shock.

A referendum saw voters narrowly reject the government’s plans for a car fuel levy and a tax on air tickets.

The measures were designed to help Switzerland meet targets under the Paris Agreement on climate change.

Opponents also pointed out that Switzerland is responsible for only 0.1% of global emissions, and expressed doubts that such policies would help the environment.

The vote, under Switzerland’s system of direct democracy, went 51% against, 49% in favour.

The no-vote to limiting emissions is a huge shock. The Swiss government drafted this law carefully. The plan: to cut greenhouse gases to half their 1990 levels by 2030, using a combination of more renewables and taxes on fossil fuels.

A proposal to outlaw artificial pesticides, and another to improve drinking water by giving subsidies only to farmers who eschew chemicals were both voted down by 61%

Switzerland’s system of direct democracy means all major decisions in the Alpine nation are taken at the ballot box.

Campaigners simply have to gather 100,000 signatures to ensure a nationwide vote.

Where is the CO2 Coming From?

There will be no progress on CO2 emissions until China is on board.

If the US cut its emissions to zero (assuming everything else stayed the same) it would not make much of a dent.

Of course, everything else would not stay the same. If the US cut emissions to zero, the world economy would crash along with food production with obvious ramifications.

Meanwhile there is a heat wave in the US, accompanied with notable howls as if the US could have done something 10 or even 20 years ago.

Six days ago, the Texas grid operator urged electricity conservation as many power generators are unexpectedly offline and temperatures rise.

The Electric Reliability Council of Texas said in a statement Monday that a significant number of unexpected power plant outages, combined with expected record use of electricity due to hot weather, has resulted in tight grid conditions. Approximately 12,000 megawatts of generation were offline Monday, or enough to power 2.4 million homes on a hot summer day.

$66 Billion Spent on Renewables Before the Texas Blackouts

RealClear energy asks Why Was $66 Billion Spent on Renewables Before the Texas Blackouts?

Because Big Wind and Big Solar Got $22 Billion in Subsidies

For every dollar spent by the wind and solar sectors in Texas, they got roughly 33 cents from taxpayers. By any measure, this is an outrageous level of subsidization. And Texans are learning that the tens of billions of dollars spent on wind and solar are not translating into reliable electricity. 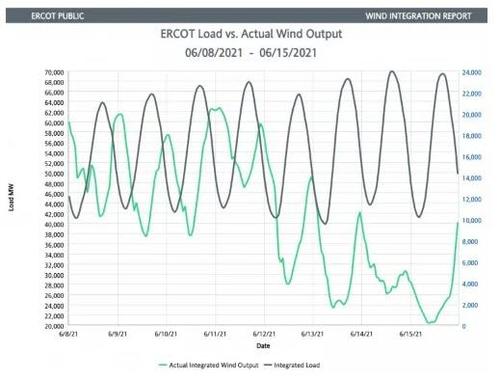 As I showed in my April 26 article for Real Clear Energy, the Texas oil and gas sector pays about 54 times more in taxes per year than the wind and solar sectors. According to the Houston Chronicle, the oil and gas sector paid about $13.4 billion in state taxes and royalties in 2019. By contrast, the wind and solar sectors are paying roughly $250 million per year in state and local taxes.

The bottom line here is obvious: If Texas is serious about increasing electricity reliability and cutting greenhouse gas emissions, it should be building nuclear plants, which proved to be the most reliable generation during the February freeze. For $66 billion, the state could have added another 6,000 megawatts or more, of new nuclear capacity. Alas, that’s not happening.

Adding more wind capacity to the Texas grid won’t do much to help meet demand during hot summer days.

The ERCOT grid shows that tens of billions of dollars in tax incentives have resulted in the addition of tens of thousands of megawatts of generation capacity to the Texas grid that does precious little to provide power during periods of peak electricity demand. That’s a bad outcome.

The idea we could have done something 10 years ago or even 20 years ago that would satisfy the the Greens, at an affordable price (most likely any price), that would have changed anything happening today is total nonsense.

China is still the elephant in the room.

Meanwhile, wind and solar technology is getting better and electric cars will be the norm within a decade.

To the extent there is a problem that can be solved at all, the free market will find it, not government bureaucrats

The Zoomers in Switzerland made the right choice.