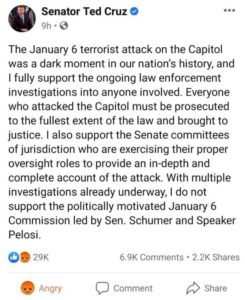 Ted Cruz called January 6 a “terrorist attack” and supports the ongoing investigation and prosecution of Trump supporters, adding that “everyone who attacked the Capitol must be prosecuted to the fullest extent of the law and brought to justice.”

Republican Senator Ted Cruz just called for more Trump supporters to be investigated, prosecuted, and incarcerated for entering the Capitol building on January 6. “The January 6 terrorist attack on the Capitol was a dark moment in our nation’s history, and I fully support the ongoing law enforcement investigations into anyone involved,” said Cruz in a Facebook post.

“Everyone who attacked the Capitol must be prosecuted to the fullest extent of the law and brought to justice. I also support the Senate committees of jurisdiction who are exercising their proper oversight roles to provide an in-depth and complete account of the attack,” Cruz continued. At the end of the statement, Cruz noted that he does not support the now-failed proposal for the 9/11-style January 6 Commission.

It is worth noting that the post contained no mention of Ashli Babbitt, the unarmed American citizen who was brutally shot point blank in the neck by an unnamed Capitol building police officer. One elected official who inquired about the horrible murder during a House Oversight and Reform Committee hearing was none other than Rep. Paul Gosar (R-AZ), who asked Acting Attorney General Jeffrey Rosen and Capitol Hill Police Chief Robert Conti about the fallen “veteran wrapped in an American flag,” demanding answers about her death.

The people have a right to know: who executed an unarmed 100lb woman at point blank range with no warnings, no commands or non-lethal force? pic.twitter.com/eTrgyhM8on

January 6 detainees have been subject to solitary confinement, abuse by prison guards, denied routine access to family members and their own defense attorneys, according to reports. It does not appear that “justice” has been served for these American citizens, who have even found support from Democrats like Elizabeth Warren for being subject to such inhumane treatment. “Solitary confinement is a form of punishment that is cruel and psychologically damaging,” Warren told Politico. “And we’re talking about people who haven’t been convicted of anything yet.”

Libertarians who warned that the post-9/11 federal law enforcement apparatus could be maliciously turned against the American people following President Bush’s signing of the Patriot Act, and even more so after Edward Snowden and Glenn Greenwald exposed the NSA’s mass surveillance of American citizens under the Obama administration, may feel a sense of disappointing vindication as they learn of the actions taken by the Biden administration. The uniform rhetoric about January 6 being spouted by Biden’s bureaucrats, elected officials like Chuck Schumer, Nancy Pelosi, Ted Cruz, in lockstep with mainstream media voices like CNN’s Don Lemon or The View‘s Meghan McCain, who said that the Capitol Building “insurrectionists” should be treated like “actual terrorists,” simply highlights the true mindset of the globalist anti-American oligarchical uniparty residing in Washington.

“I’m not against sending these people to Gitmo,” McCain said about January 6 protestors, disgruntled American citizens frustrated with a corrupt electoral system controlled by politicians hellbent on remaining indifferent to fraud. “You are not patriots. You do not represent America. You are scum of the earth…”

According to the DHS, Secretary Alejandro Mayorkas has committed to “… redouble our efforts, to fight hate, and to fight one of the greatest threats that we face currently on our homeland, which is the threat of domestic terrorism.”

All of this, combined with a FISA court system that essentially serves as a rubber stamp for the federal government to unmask and surveil American citizens, as seen in the case of General Michael Flynn and President Donald Trump, has attributed to growing concerns over infringements on American civil liberties and Constitutional protections. For example, America First host Nick Fuentes was placed on a federal No-Fly list despite not being charged with any crimes, a move that many experts have suggested was politically motivated.

January 6 had brought both parties in the House together, similarly to how Al-Qaeda and nonexistent weapons of mass destruction did in the early 2000’s. However, the bill to establish the 9/11-style January 6 Commission ultimately failed in the Senate 54-35, just 6 votes short, as National File reported.

Despite prominent figures in both the Democrat and Republican parties repeatedly referring to January 6 as a “terrorist attack” and the protestors as “insurrectionists,” constitutional experts have said the events leading up to and following the 2020 November election constitute what was described as an “insurrection going on inside of the entire government,” according to Constitutional Attorney Ivan Raiklin.

“Everyone consummated the violations to the Constitution across the board,” Raiklin explained, referring to States, Congress, and Vice President Mike Pence, who failed to properly address the evidence of widespread voter fraud during the 2020 election.