Young sacrifice belief in God on altar of Satanism

In fact, as the Global Order of Satan UK – as well as other leaders and members of Satanic groups around the world insist – it would be difficult to spot a Satanist walking down the street.

Yet while the macabre occult rituals, virgin sacrifices, chalices of blood and belief in the actual Devil are a thing of the past, Satanism is luring increasing numbers of young people disillusioned with “outdated” and “dogmatic” traditional religions to join its fold by offering an “alternative” to “stuffy”, traditional faiths.

The Sunday Telegraph has spoken to leaders and members of Satanic groups around the world who claim that the opportunities Satanism offers people to engage in activism and campaign on issues such as gender and sexuality is part of the appeal for the younger members, particularly those who are increasingly less likely to declare themselves as Christian.

Chaplain Leopold, a 32-year-old London-based undertaker, co-runs the Global Order of Satan UK which he said has seen a 200 per cent increase in membership over the last five years.

‘A movement towards self-identification’

“I’d love to be able to claim that we could pat ourselves on the back and say, yes, we’ve done our infernal work here, and we’re successfully declining the number of Christians, but I think it’s a far more complex issue than that,” he said.

He said two factors were responsible: the decreasing popularity of “traditional dogmatic religions”, and “a movement towards self-identification and self-realisation”.

“This is particularly amongst younger people who don’t want to be identified as part of a prescriptive dogmatic religion and rather want to identify as their own self-beliefs and self-realisation – which is what Satanism offers. So we often say that we’re sort of the religion for those who don’t like the oppression of previous religions.”

Chaplain Leopold added that many young people are “turning away from what are now incredibly outdated, very obviously stuffy views that are completely not in keeping with modern times” – particularly regarding issues such as sexuality and gender identity.

His comments come as Christianity battles to appeal to younger generations and remains divided on the issue of gay marriage, with bishops preparing for an historic vote on the matter next month.

According to the Office for National Statistics (ONS) census, published in November, the number of people in England and Wales identifying as Satanists saw a 167 per cent increase between 2011 and 2021, up from 1,893 to 5,054.

At the same time, the number of Christians dropped so low that they now account for less than half of England and Wales’ population for the first time in census history.

The census data prompted the Archbishop of York to insist that Christianity is not in “terminal decline” and that Jesus suffered setbacks, so Christians will too. The figures revealed that 46.2 per cent of the population (27.5 million people) described themselves as “Christian” in 2021, marking a 13.1 percentage point decrease from 59.3 per cent (33.3 million people) in 2011. 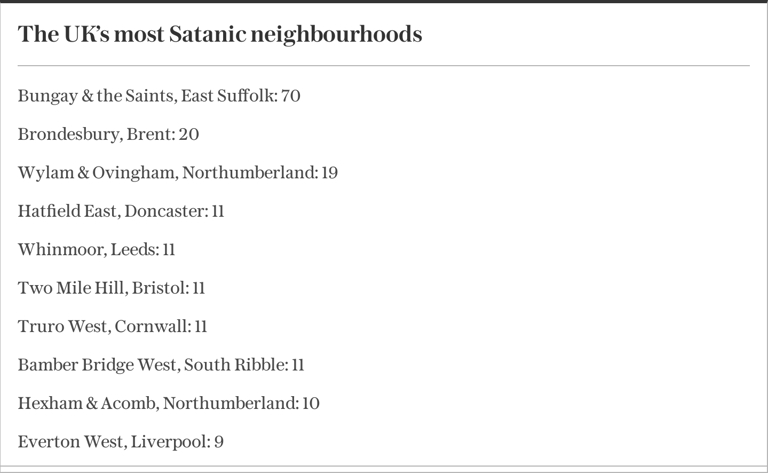 The UK’s most Satanic neighbourhoods© Provided by The Telegraph

Academics claim that this is indicative of a wider trend. Dr David Robertson, senior lecturer in religious studies at The Open University, said: “The appeal of a lot of new religions, including Satanism, is that they offer a form of religion that directly addresses the social issues that matter more to the young people, especially their willingness to be activists.

“And not only do they offer an opportunity for this sort of stuff to actively challenge laws, but also to appeal to the activists among the young people.”

Satanism is ‘a young person’s religion’

Professor Linda Woodhead, head of department theology and religious studies at King’s College London, added that Satanism “is a young person’s religion” but that “the bigger phenomenon we’re seeing is the incredible diversification of the religious and spiritual landscape”. “There’s now a lot of solitary exploration, particularly with the internet, and you can find anything to fit your particular identity, interests, values or beliefs.”

However, The Rev Diarmaid MacCulloch, Emeritus Professor of the History of the Church at the University of Oxford, said: “I’d say that these are all symptoms of people who’ve been disappointed by other religions, or who may only know them superficially, and who are looking for a system of belief to make their own, since our society encourages individual consumer choice and research.”

Contrary to the stereotypes, only a fringe minority of Satanists actually worship the devil. Instead, the religion’s fascination with Satan is more metaphorical, identifying with the figure of the rebel, as epitomised in the protagonist of John Milton’s 17th-century epic poem, Paradise Lost.

Satanists generally do not believe in a higher power, and instead revolve around a religion “of the self”, believing that it is up to individuals to define their own moral code, and to develop themselves as their own God heads.

However, this does not preclude Satanists from “having fun getting together and doing rituals in the forest” by candlelight, encircled and enrobed.

Chaplain Leopold said that ritual is used as a form of community bonding and meditation to give people the time to develop “your own personal vision of yourself as Satan”.

“You wouldn’t recognise a Satanist most of the time if you pass them in the street,” he said. “But then we like to have the ritual space, which is when we don the robes and light the candles and hail Satan and everything else we wish to do.

“Because we embrace that aspect – it’s almost like a form of mindfulness, a form of self-actualisation – and while religions think they’re casting magic spells when they perform their rituals, whereas we just believe that we’re all coming together and affirming our bonds as humans.

“You should never feel like it’s a chore going into a Satanic ritual,” he added. “It shouldn’t be like: ‘oh, God, it’s Sunday, we’ve got to go to church’. It should be something you want to engage in, that you’re enjoying and benefitting from.”

Despite this, Chaplain Leopold said that because of the “stigma” associated with Satanism, many people may not feel comfortable to declare themselves as affiliated with the religion.

Malcolm Jarry, co-founder of The Satanic Temple, based in Salem, Massachusetts, suggested that the ONS figures were a drastic underestimate. He said that his organisation, founded in 2012, has 21,996 members registered from the UK, and around a million followers worldwide.

“The demographics of TST membership are fairly broad but certainly, younger people tend to be more engaged in activism, so they are more visible,” he added. “I think our rise in popularity is founded on our having a set of principles and values that resonate with many people and our rejection of hypocrisy and corruption.”