CALGARY, AB: Alberta’s political landscape may be shifting from the two-party system that saw only UCP and NDP MLAs elected to the legislature in the 2019 provincial election.

An exclusive Mainstreet Research Poll commissioned by the Western Standard found the NDP lead the pack with 35% among decided and leaning voters. The UCP are in second with 28%, and the Wildrose Independence Party has pushed itself into a competitive third place at 16%.

The poll was conducted between May 19-20, 2021 with a scientifically weighted sample size of 1,010 adults living in Alberta. Respondents were interviewed on landlines and cell phones and the results have a margin of error of +/- 3% with a confidence level of 95%.

“My advice federally to Conservatives is to not be within a mile of Jason Kenney right now. His performance on the pandemic – on both ends of the spectrum – is putting a taint on all Conservatives. This is causing an uptick in Maverick Party support, and Wildrose support. 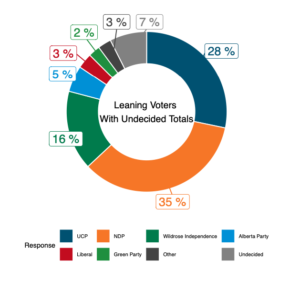 CLICK HERE TO SUBSCIBE TO THE WESTERN STANDARD, AND READ THE FULL STORY.