A former chief medical officer of health for Alberta says the province’s plan to ease COVID-19 restrictions is “aggressive to the point of recklessness” and is setting the province up for a fourth wave.

“The timing is really aggressive and going to a third stage with 70 per cent (of the population vaccinated) on a single dose, in which basically the province is completely open, is irresponsible,” said Dr. James Talbot, who is the co-chair of the Edmonton Zone Medical Staff Association’s COVID-19 committee.

“Aggressive to the point of recklessness… I’m not surprised but I’m extremely disappointed.”

The three-stage approach is tied to the percentage of Albertans 12 and older who have received their first dose of COVID-19 vaccine, as well as hospitalization numbers. 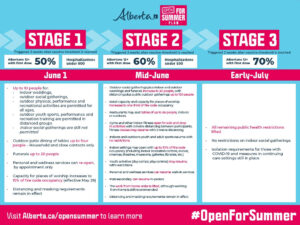 Currently, 9.3 per cent of eligible Albertans are fully vaccinated with two doses and 7.9 per cent of the total population has received two doses.

Talbot, who served as Alberta’s chief medical officer of health for three years before stepping down in 2015, said “virtually every other jurisdiction is doing a much slower, less aggressive reopening.”

Dr. Craig Jenne, an infectious diseases researcher at the University of Calgary, was also surprised to see how quickly the reopening is moving.

“This does seem a bit hurried and if we look at other provinces – British Columbia for example and even Ontario – they’re aiming to try and reach something equivalent to our Stage 3 by the fall,” Jenne explained.

“Previously, the strength or at least the credit to Alberta reopening plans was this measured approach where one set of restrictions would be lifted and we would allow a three-week washout to see what happened following that change before deciding to proceed to the next steps.”

British Columbia officials laid out their province’s plan for reopening Tuesday, which is a four-stage approach that aims to lift public health measures by September. Ontario’s three-phase reopening plan puts at least 21 days between phases and does not have a specific date outlined for when things will return to “normal.”

Both plans also focus on vaccination rates and other key public health indicators.

Talbot believes if the plan goes ahead as outlined, Alberta will see a fourth wave of COVID-19.

“To put two weeks between stages when we know that the virus increases take at least two weeks and the indicators that they’re still stuck on — hospitalizations — take four weeks, means that they’re guaranteeing you they’re going to go through two stages before there is any possibility that the numbers will interfere with what they’re doing,” Talbot explained.

“We are one of the last to get this under control and we’re going to be one of the first to open up completely. And our immunization rates are not significantly ahead of any other jurisdiction.”
Talbot outlined concerns with the plan being based on single doses of vaccines, rather than double doses. He said his committee would like to see 70 per cent of the population double-dosed before hitting Stage 3. He is also worried about variants.

“The science is pretty clear that the new Indian variant, the B.1.617, in people that have only have a single dose, is quite good at infecting them again. You really need two doses to get good protection and that’s why the U.K. slowed down their reopening and in fact reversed it in places,” he stressed.

“We’re not learning from that at all… you have to wonder what the thinking is.”

Jenne echoed concerns around basing the plan on single doses administered. He said relying too heavily on one dose may give people a sense of false security that the second dose is not important, adding that Alberta’s plan is missing a bar for fully vaccinated individuals with each step.

“As we move forward, people are going to be receiving a very clear message that once they get the first shot and the majority of their neighbours do, that we can now proceed more or less restriction-free. We have to remember that we need that second dose,” Jenne said.

“The more cases there are around the world, the more travel there is, the more risk that a variant does appear here in Alberta and our best protection for that is a fully vaccinated population.”

He said active cases in the community, the emergence of variants and how the province will respond to the changing demographic should also be factored into the reopening equation.

“We have to remember there is still a lot of virus out there and even with these thresholds of trying to hit, for example, 60 per cent of vaccine (in) eligible Albertans, that means that more than half the province remains unvaccinated,” Jenne said.

Health Minister Tyler Shandro said the plan is “based on facts, it’s based on statistics that we are seeing play out all over the world.”

“We are able to watch other jurisdictions as they are navigating their post-pandemic plans and they have helped to inform ours,” he said. “But make no mistake, this is a plan that is tailor-made for us here in Alberta.”

Shandro said the recommendations brought forward to the cabinet committee looked at not just what other jurisdictions are doing with vaccine uptake, but also the efficacy rate of one dose of vaccine.

Alberta Opposition Leader Rachel Notley also expressed concern over the pace of the reopening plan, given that Alberta had the highest rate of infection of any region in North America earlier this month.

“I have questions about how the premier decided on this pace, and whether it was informed by science, or simply by working backwards from the first day of the Calgary Stampede,” Notley said.

“Jason Kenney has downplayed the risk of COVID, he has ignored warnings, he failed to act for weeks on end when the danger was obvious, and he failed to enforce the rules until the violations became international news.

“I hope that this plan does not continue Jason Kenney’s pattern of failure to responsibly manage Alberta’s pandemic response.”

Kenney said the province wants to “keep it simple for people to aim towards, to unite around one big target that we can focus on” when it comes to the 70 per cent target for Stage 3.

“Obviously we wish we had broader second dose coverage by now, but because of the delays in federal procurement, we’ve ended up at a situation where we had to go long on the second doses.”

Kenney said Alberta has already seen the impact of its vaccination progress with the decline in new and active cases, and the plateau in hospital and ICU admissions. Kenney said other factors were considered beyond just the first-dose target.

“(Chief medical officer of health) Dr. (Deena) Hinshaw and her public health team have studied very closely the experience of other jurisdictions with robust vaccination programs. Places like, for example, Israel and the United Kingdom, various (parts of the) United States, and most of them went further on reopening at lower levels of population protection,” Kenney said.

The premier said the province will continue to have vigilance, take a targeted approach to outbreaks as they happen and screen for variants.

Kenney maintained that Alberta’s plan is a cautious approach, one that is much more cautious than many U.S. states.

“I don’t think many Albertans will feel that this is high speed.”

Hinshaw was not present at Wednesday’s news conference. Kenney said she had previously booked a personal day and would be available to take questions from the media on Thursday.
The province has not yet laid out its plan or timeline for second doses of vaccine for Albertans. Kenney estimated second doses will likely start being offered in mid-June, once first-dose demand trails off.
c. GLOBAL NEWS
admin2021-05-27T16:51:57+00:00May 27, 2021|Current Events|0 Comments