Prime Minister Naftali Bennett on Tuesday agreed with senior health officials on an expansion of COVID-19 restrictions, according to multiple reports, in an effort to stem a spike in coronavirus cases driven by the Delta variant

Among those taking part in the meeting, as Israel recorded some of its worst morbidity figures in months, were Health Minister Nitzan Horowitz; the directors of the Prime Minister’s Office and the Health Ministry; public health chief Sharon Alroy-Preis; and other professionals from the health and finance ministries.

The sides agreed to recommend that the Green Pass apply to most events and leisure activities, meaning Israelis will have to show proof they are vaccinated, have recovered from COVID-19, or tested negative for the virus in the past 72 hours, in order to enter most businesses.

They also agreed on recommending the age at which children must have a negative coronavirus test be lowered to three. The state would pick up the tab for tests on kids from ages 3-12, but families of those older than 12 — who are eligible to get vaccinated — would have to foot the bill.

Another measure that those at the meeting reportedly agreed on was limiting capacity during non-Green Pass events to 50 people indoors and 100 outdoors. 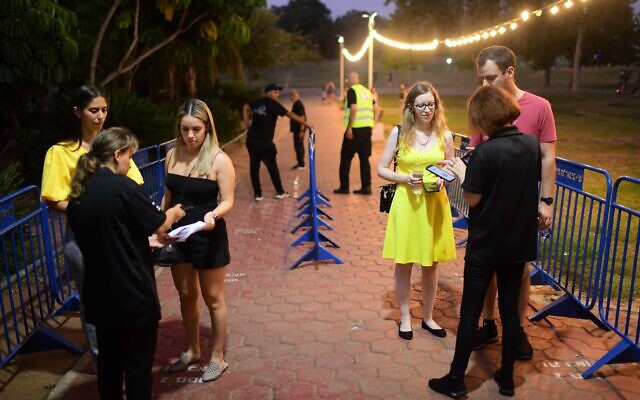 Israelis present their COVID-19 vaccination certificates at the entrance to a concert venue in Tel Aviv, on August 7, 2021, in Tel Aviv. (Tomer Neuberg/Flash90)

The tightened restrictions would be accompanied by an increase in the number of rapid testing stations across the country.

The coronavirus cabinet — a high-level ministerial forum tasked with steering the government’s pandemic policy — will convene on Wednesday to discuss the proposed measures.

Meanwhile, Channel 13 news reported that Bennett hopes to broaden eligibility for a third dose to those over 45 or 50 in the near future. Currently only those over 60 or who are immunocompromised can get a third dose.

According to one top expert, initial data being gathered in the healthcare system suggests the booster shots are helping prevent COVID-19 infections.

He added that there would be better data on the booster’s efficiency toward the weekend and said if the figures “look as they do now,” the Health Ministry would likely recommend those over 40 get a third vaccine shot.

Bennett was due to hold a separate discussion later Tuesday on efforts to boost the number of patients the health system can deal with at once, as serious cases rose to some 400.

According to Channel 12 news, among the measures being weighed on this front are the opening of two more hospital wards in the country for coronavirus patients, staffed by military doctors. Additionally, Israel Defense Forces medics could be tasked with helping treat moderate patients.

With infections surging, an Education Ministry source quoted by various Hebrew media outlets estimated that as the school year opens on September 1, the country could see some 5,000 students diagnosed with coronavirus each day. 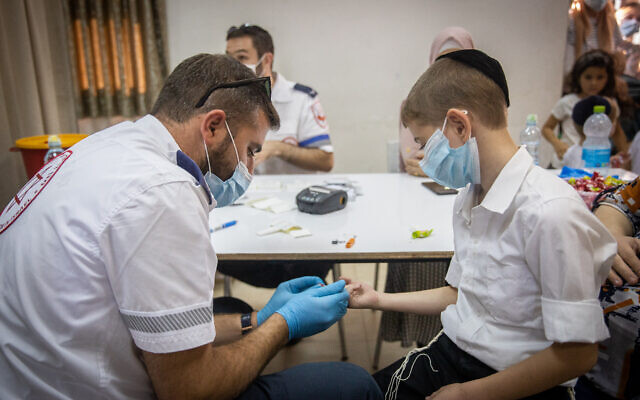 The source predicted that at the current rate, September 1 will see 10,000 Israelis diagnosed every day, with school students representing half of them.

The source said if infections continue to surge, school principals will be able to divide classes into several different learning spaces or even have some groups of students study remotely.

Other measures the ministry is set to recommend include having students eat outside and hold breaks at different times, according to the reports.

Last week, Bennett signed off on a plan, prepared by several government ministries, for reopening schools that will rely on massive testing, in a bid to prevent large numbers of students from having to quarantine if one of them gets infected.

Meanwhile, police have announced plans to increase enforcement of COVID-19 restrictions that will include the use of drones and undercover police officers.

The drones will have loudspeakers through which cops will encourage people to wear face masks.

Police will focus their efforts on cities with high infection rates such as Hadera, Rehovot, Ashkelon, Kiryat Gat, Ashdod and Yavne. 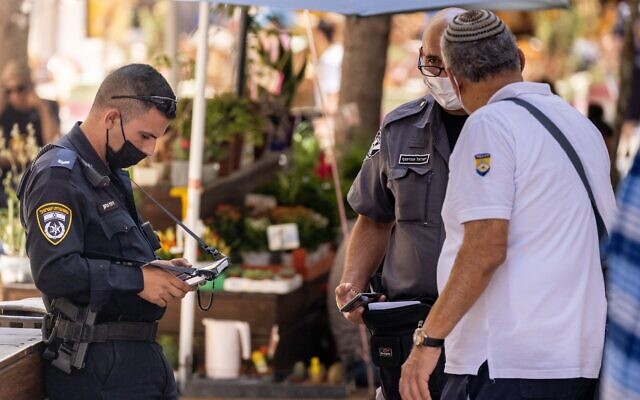 According to the Health Ministry, 2,942 new COVID cases were diagnosed on Tuesday by the afternoon, after 6,343 infections were diagnosed the day before — the first time since early February over 6,000 people tested positive in a day.

The number of serious cases was slightly down since the morning — from 394 to 388 — though there were also 12 more deaths since the morning for a total of 6,571, which likely explained the drop in severe cases.

Tuesday’s positive test rate stood at 4.47 percent, down slightly from Monday, when the highest positivity rate was recorded since early March at 4.84%.

Opposition Leader Benjamin Netanyahu, Bennett’s predecessor as prime minister, tore into the incumbent premier over the morbidity spike. “Israel did not need to reach this failure,” he said in a statement.

He also slammed the government over its world-leading drive to administer booster shots for those over 60, saying they should have been approved sooner.

“If Bennett had done this on time we wouldn’t have reached morbidity records like these and they wouldn’t be talking about a lockdown right now,” Netanyahu said.

Earlier this week, the full Green Pass was reinstated in Israel, limiting most public gatherings — both indoor and outdoor — to those who are vaccinated, recovered or present a negative COVID test, with exemptions until August 20 for those aged 12 and under.

In addition to local measures, Israel is also working to stem the tide of new cases and variants arriving from overseas with strict regulations for incoming travelers — both vaccinated and non-vaccinated — from almost all countries. Home quarantine will be required for 14 days, or seven days with two negative tests, starting on Monday.