Kodak bowed to the dictates of the Chinese Communist Party and removed a post from their Instagram page. The photo, by Patrick Wack, showed the Xinjiang region of China, which is the primary home of the Uyghur population, who reportedly suffer untold atrocities under CCP tyranny.

Wack is a frequent photographer of Xinjiang and China, who posts photos of the region, the people and landscape of China, as well as other images. He’s described Xinjiang as an “Orwellian dystopia,” according to the Hong Kong Free Press.

In removing the image on Monday, Kodak said “Kodak’s Instagram page is intended to enable creativity by providing a platform for promoting the medium of film. It is not intended to be a platform for political commentary.” They said that Wack’s views “are not endorsed bu Kodak.” And they apologized for “any misunderstanding or offense the post may have caused.”

On their WeChat page, the storied American film company said that they would “respect the Chinese government and Chinese laws.” Kodak also said it would “keep itself in check.” 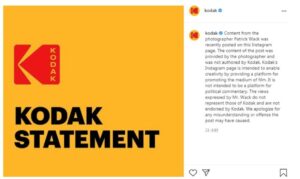 On WeChat, Kodak wrote “For a long time, Kodak has maintained a good relationship with the Chinese government and has been in close cooperation with various government departments. We will continue to respect the Chinese government and the Chinese law.”
“We will keep ourselves in check and correct ourselves, taking this as an example of the need for caution,” they continued, noting that “management loopholes” are what caused the post to go up.
The post was in support of Wack’s new book “DUST,” which he is promoting on his own Instagram page.
A nameless editorial in the Global Times, a state-run media outlet, reported that “after strong criticism from Chinese netizens,” Kodak pulled the photos from their Instagram.
The Global Times wrote that the photos of Xinjiang were part of the “hype” from the West over atrocities in Xinjiang, which is really just as result of the “instigation of anti-China forces headed by the United States.”
The Global Times critiqued Wack, saying that “Judging from his previous public statements, he could not be counted as a ‘stubborn anti-China element’ and rarely participated in political activities.” They go on to accuse Wack of just trying to make money, and of using the association with Xinjiang to up his public image.

“The Global Times reporter observed that in the past, those who hyped up Xinjiang and other issues were either politicians from the United States and other Western countries or enterprises and institutions following the guide of Western countries,” the article reads. They suggest that Kodak post photos from more Chinese photographers in the future.

Additionally, the Global Times slams reports that the Chinese government is overreaching and authoritarian, saying “if the Chinese government strikes back at these people, it is easy to fall into arguments about ‘the big bullying the small’ and ‘the government targeting civilians’. This makes Western politicians particularly happy and will try to push them to the front lines and create problems for China.”
As for how China should deal with “this anti-China slander, China should know how to deal with it, how to fight back public opinion, and how to guide and transform them,” Global Times writes.
President Joe Biden described China’s genocide against the Uyghur Muslim population in the Xinjang province as a “cultural norm” in February. Biden said, “The central principle of Xi Jinping is that there must be a united, tightening control in China, and he uses his rationale for the things he does based on that.
“I point out to him,” the President said, “no American president can be sustained as a president if he doesn’t reflect the values of the United States, and so the idea that I’m not going to speak out against what he’s doing in Hong Kong, what he’s doing with the Uyghurs in western mountains of China, and Taiwan, trying to end the One China Policy by making it forceful, I say, and by the he says, he gets it.”
Biden added, “Culturally there are different norms in each country and their leaders are expected to follow.”
Canadian Prime Minister Justin Trudeau has also refused to label the ongoing human rights abuses in China’s Xinjiang province against the Uyghur people a genocide, saying the term needed to be “properly justified and demonstrated.”

Trudeau’s hesitance, he says, was “so as not to weaken the application of genocide in situations in the past.”