Los Angeles police officers have been directed to collect social media information on every civilian they interview, including people who haven’t been arrested or accused of a crime, according to the Guardian, citing leaked records.

According to the report, “field interview cards” used by LAPD officers contain instructions to record a civilian’s Facebook, Twitter, Instagram and any other social media accounts – along with basic biographical information. Chief Michael Moore has reportedly told cops to collect the data for use in “investigations, arrests, and prosecutions,” and has warned officers that the cards will be audited by supervisors to ensure they’re filled out completely. 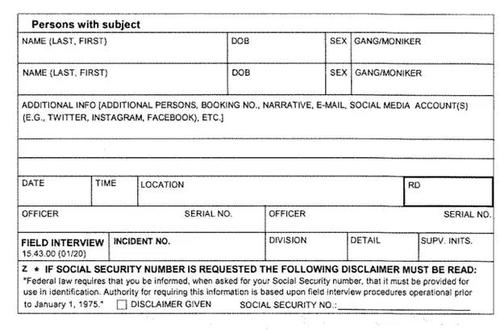 “There are real dangers about police having all of this social media identifying information at their fingertips,” said Rachel Levinson-Waldman, a deputy director at the Brennan Center for Justice, which obtained the documents.

The Brennan Center conducted a review of 40 other police agencies in the US and was unable to find another department that required social media collection on interview cards (though many have not publicly disclosed copies of the cards). The organization also obtained records about the LAPD’s social media surveillance technologies, which have raised questions about the monitoring of activist groups including Black Lives Matter. -Guardian

“Similar to a nickname or an alias, a person’s online persona or identity used for social media … can be highly beneficial to investigations,” wrote former LAPD Chief, Charlie Beck.

According to the LA Times, over half of civilians stopped by LAPD and had their personal details taken were not arrested or cited. Last October, criminal charges were filed against three officers in the LAPD’s metro division for using cards to falsely label civilians as gang members once they were stopped.

As the Guardian points out, when police obtain social media information from people, it invites the possibility that they’ll monitor people’s “friends” and other online connections, which creates additional privacy concerns.

“It allows for a huge expansion of network surveillance,” said Levinson-Waldman, who noted that the authorities have historically used Facebook photos and “likes” to falsely accuse people of criminal gang activity.

Hamid Khan of the Stop LAPD Spying Coalition noted that the LAPD also shares data with federal law enforcement agencies through “fusion centers”, and has previously used “predictive policing” technologies that rely on data collected by officers in the field and which can criminalize communities of color.

“This is like stop and frisk,” he said, of the use of field interview cards. “And this is happening with the clear goal of surveillance.” The LAPD, he noted, has allowed officers to pose undercover to investigate groups, meaning officers can create fake social media accounts to infiltrate groups.

Dr Melina Abdullah, co-founder of Black Lives Matter LA, said she had long suspected the LAPD conducted “targeted tracking” of specific groups or individual accounts, but was surprised to learn of the default collection of this information in everyday encounters. She fears this could be part of “a massive surveillance operation”. -Guardian

According to the Brennan Center, the LAPD is now looking to technology from Media Sonar, a social media tracking company that provides services to police departments. In the LAPD’s 2021 budget, $73,000 was allocated to purchase Media Sonar software to help “address a potential threat or incident before its occurrence.“

According to one message between Media Sonar and the LAPD, the software can be used to “stay on-top of drug/gang/weapon slang keywords and hashtags,” and that it offers “pre-built keyword groups” to “help jumpstart implementation” of threats and help “cast a wide net.”

In short, talk to the cops at your own risk.