Man Threatening To Blow Up Capitol Surrenders To Police

The man first drove on to the sidewalk in front of the Library of Congress at around 0915ET Thursday morning, according to Capitol Police Chief Tom Manger.

Update (1250ET): The man who claims he has a bomb in his truck outside the Library of Congress has a message for President Biden. “The revolution is on. It’s here…if you blow my truck up, it’s on you, Joe. I’m ready to die for the cause.”

He continued: “If you could do anything to save one life, even one life, you said you’d do it. Well here’s your chance. I wanna go home to see my wife…if you wanna shoot me and take the chance of blowing up 2.5 city blocks because that toolbox is full of ammonium nitrate, well…”

“I’m telling you bud. The south’s here. There’s five of us spread across your little DC part here.”

NEW: “The revolution is on. It’s here… I’m ready to die for the cause.”

Here’s video from the man who said he’s got a bomb outside the Capitol.

Follow @huffpost and @sara_bee for more as the situation develops. pic.twitter.com/aRx1hES7Vl

“The south’s here. There’s five of us spreading all across your little DC part here.” pic.twitter.com/OokKAaRZe5

The man has what he claims is a bomb sitting in his lap.

These videos of the man who is in a standoff with Capitol Police clearly show what looks to be a bomb in his lap—it’s a large canister with a battery-powered device on top. He also claims to have ammonium nitrate in the toolbox of his truck, which could produce a large explosion.

Here’s one image of what he claims to be a bomb in his lap. pic.twitter.com/wBJMFCB78I

Amazingly, a separate bomb scare is currently unfolding in Times Square, which has been evacuated by the NYPD.

Update (1215ET): Things are getting weird in the Capitol again.

Capitol police are still negotiating with the suspect who claims to have a bomb in his truck situation near the Library of Congress. The identity of the man has been determined, but a motive for his planned attack isn’t yet known.

Capitol Police are “still seeking a peaceful resolution to this incident,” the chief told a group of reporters.

Meanwhile, at least one media report offered more colorful details about the would-be bomber. Apparently, he’s sitting in a black pickup truck parked right in front of the Library of Congress building where he had been shouting about having “a bomb” while tossing dollar bills out of his window.

The Independent, a British newspaper with growing presence in Washington, offered a photo of the suspect along with witness comments. Other media reports claimed the man has a propane tank rigged as a bomb in his truck.

Sydney Bobb, 22, a student at the University of Wisconsin-Madison, said she was on her way to a race in politics class near the Library of Congress at about 9.25am when she noticed a man in a black pickup truck shouting that he had a bomb.

“I was walking on that block because that’s where I go to class. He was shouting that he had a bomb. And then he threw money out the side of the truck,” Ms Bobb told The Independent by phone as she was being evacuated from her class.

She said she couldn’t see any device in his truck, and law enforcement have so far been unable to verify whether the man has explosives.

“I remember feeling scared,” she said.

Ms Bobb took a photo of the suspect which showed dollar bills strewn on the ground near the truck.

She initially thought the bills must have been fake “because who throws money out of a truck?” 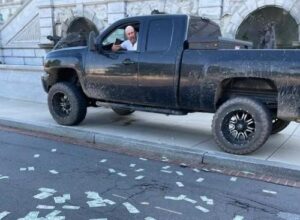 News from @PeteWilliamsNBC on the bomb threat outside the Capitol: ‘The man has been identified. He’s a white male from North Carolina, and he is making anti-government statements.’

Now, we wait to see whether Democrats will use the incident to demand Capitol Hill and the surrounding area return to the locked-down militarized state that lasted for weeks in the wake of Jan. 6.