Vaccinated Canadians won’t be spending time around the unvaccinated: poll

BY KELLYTURNER AND KAYLA BUTLER

OTTAWA – A new poll suggests vaccinated Canadians are unlikely to spend time around those who remain unvaccinated.

The Angus Reid survey shows 53 per cent of people polled say they won’t spend time around those who have not yet received their shots.

Nearly two-thirds of those aged 18-34 say that as long as they are personally protected through vaccination they will socialize with unvaccinated people.

Canadians 65 and older, a population that has been more hard hit by the virus, are more likely to say that they will avoid people who aren’t vaccinated. 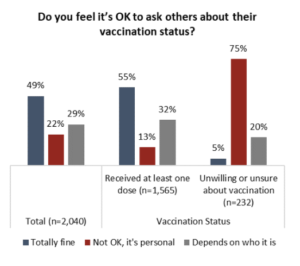 The vaccinated also told the pollster it’s okay to ask about vaccination status, while the unvaccinated say that information is personal and people should not be inquiring.

More than half of those who have received at least one dose of vaccine say it is perfectly fine to ask someone about their vaccination status.

Another three-in-10 say it depends, and are more comfortable asking family and friends, but less so strangers.

Conversely, three-quarters of those who say they’ll be skipping inoculation, view being asked about one’s vaccination status as inappropriate.

Vaccine hesitancy remains highest in Alberta, where one-in-five say they’re either unwilling or

unsure about getting vaccinated.

That’s twice the national average, and higher than the next two provinces with the most vaccine hesitancy–Saskatchewan and Manitoba–which sit around 15 per cent unwilling or unsure.

However, hesitancy in Canada has dropped since Angus Reid started polling earlier this year.

About a third of Canadians say they are more anxious than excited about returning to their pre-pandemic activities. This rises to 38 per cent among those over the age of 64.

Two-thirds of Canadians say that they support vaccine passports for large events in their province.

The Calgary Stampede recently required proof of vaccination for people coming to compete in the rodeo events and for those looking to enter the Nashville North music tent.