Prior to the 2020 election Maricopa County Elections Director Kelly Dixon demanded that poll workers give ballpoint pens to voters every day prior to elections, but on elections day she said they “NEED” to use sharpies.

We know that Trump voters showed up in overwhelming numbers on election day due to mail-in fraud concerns.

This is always the case.  Republicans like to vote in person to make sure their vote counts.

Now there is evidence that Kelly Dixon donated to Democrat Mark Kelly. 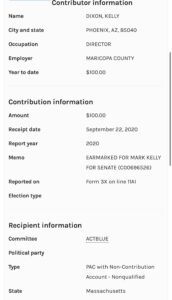 Headline USA reports “According to her LinkedIn page, her office was responsible for filling “more than 4,000 temporary worker positions to support election day sites and elections activities.”

How many of the found discrepancies were caused by this woman or her 4,000 handpicked employees?

Of COURSE she did!!!

Of COURSE she did!!!

Why did they strictly use sharpies on election day but ballpoint pens every day prior?

Is Kelly Dixon also responsible for the 168,000 offset ballots printed on demand?

READ MORE AT THE GATEWAY PUNDIT