A ten year old Elizabethton, Tennessee girl was lured to a neighbors home by being invited to come play. Instead, she was tortured and held captive by two teenagers for five hours — while their mother allegedly filmed the violence.

The mother of at least one of the girls, said to be 35-year-old Theresa Delgado, is accused of filming the torture and posting it to social media. She has not been arrested.

Law Enforcement Today reports, “the two teenage juveniles have been arrested, authorities have not yet arrested the mother who allegedly filmed the beating.” The report says that they have been charged with aggravated kidnapping and aggravated assault.

Brittany O’Connell, the mother of ten-year-old Callie, wrote in a lengthy Facebook post — complete with horrifying photos — that the attack took place on July 19.

“On Monday, July 19, 2021 at approximately 12:27 pm, I opened the door to my worst nightmare. My 10 year old daughter Callie was covered in blood and severely beaten. I called 911 as soon as I saw her, and my world completely shattered within seconds. Those whole ELEVEN minutes that it took the officers to arrive, I felt a feeling that no mother should ever experience,” the mother began. “That morning, Callies so-called ‘friends’ knocked on our door and asked if SHE COULD COME PLAY. This was something that they did every single day for the past six months. We are also their neighbors. As soon as she had walked in their apartment, she had realized that something was wrong. From 7:30 am until 12:27 pm my daughter Callie was held hostage in their pantry, dragged to multiple rooms and beaten.”

Callie was attacked all over her head, face, and body by fists and multiple objects. The mother alleges that she was also “sprayed with bleach and humiliated.” She wrote that “the acts were all recorded by their mother who did nothing to stop it.” 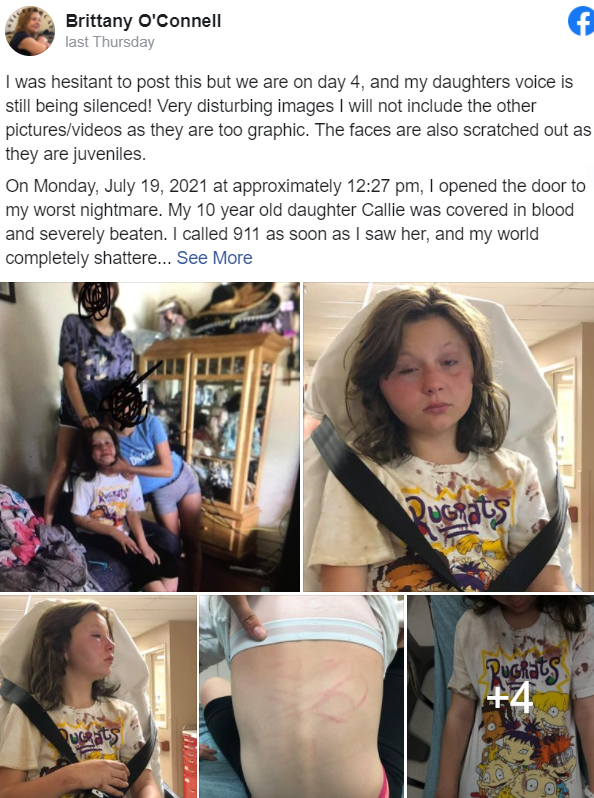 Photos show marks that look like the little girl was bound and whipped.

Brittany O’Connell added that multiple videos of the assault were shared to social media including Snapchat and TikTok.

“They made Callie clean up her own blood afterwards, and taunt her about bleeding on them,” she continued.

The Elizabethton Police Department came under intense scrutiny over the incident due to the fact that they’d responded to the victim’s home on the day of the incident but didn’t enact any arrests until four days afterward on July 23rd.